A three-day sub-regional forum on the use of media in preaching Islamic culture in West Africa commenced on Thursday at Baobab Holiday Resort.

The sub-regional convergence was organised by the Islamic Educational, Scientific Cultural Organization (ISESCO) in collaboration with NATCOM.

The purpose of the forum is to strengthen the capacity of Islamic preachers on the use of the media for the development of a culture of peace and dialogue in the context of Islamic culture.

According to him, the internet is a wonderful medium for getting information about anything, which can be used to spread Islam.

He said it is therefore essential for Muslims to be upgraded and to update their techniques and practices in order to address the negative image of Islam for non-Muslims based on wrong prejudices.

For his part, the representative of ISESCO, Papa Touman Ndiaye, said ISESCO is pleased to join hands with Munazzamat Al-Dawa Al-Islamia in organizing this training held with the support of NATCOM.

The expert on culture and communication went on to highlight some of the reason for holding the forum.

He said the cooperation that exists between The Gambia and ISECO is very cordial and saluted the warm welcome given to them.

He said their areas of intervention include education, health, agriculture, provision of safe-drinking water, personal assistance, bursary to the students, and support to the orphans, widows and needy families.

Drammeh further revealed that they do sponsor fast breaking, provision of sacrificial animals during the fast of EID-UL adha, and scholarship to further education and Hajj among others.

According to him, the organization has a long-standing relationship with ISESCO in grooming the youth in becoming responsible leaders of tomorrow, as well as facilitating and encourages them to withstand the current challenges of the world through civic education.

The use of the media is an important means of communication that plays a vital role in the lives of individuals, he noted.

In her official opening remarks, Nancy Niang, permanent secretary, Ministry of Information and Communication Infrastructure, expressed appreciation to be associated with the important forum.

She described the forum as a laudable initiative by ISESCO to train participants to improve their skills in the dissemination of the values of Islam in the media in a bid to strengthening the culture of peace and promoting dialogue among cultures, civilization and religions.

She also said the aim of the sub-regional forum “is not to present the media as a threat to our religions and cultural identity”, but to explore and discuss the potential that mass media have if used as a tool to build an Islamic society. 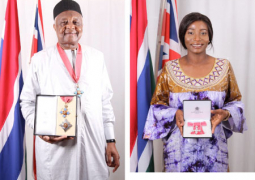