One Omar Sowe was on , convicted and sentenced to six months imprisonment and one year imprisonment by Senior Magistrate Mbacke for office breaking and stealing.

The accused was sentenced without an option of a fine and both sentences to run concurrently.

The accused was earlier arraigned and charged with office breaking and stealing, contrary to section 283 (1) and 252 of the criminal code.

According to the charge sheet, the accused broke into the office of one Ousman Jasseh who was his former employer and stole the following items: a digital camera valued at D12, 000, cash D11, 000 and some jewelry, valued at D100, 000. He pleaded guilty.

Prosecutor 1674 Ceesay stood in for the IGP, 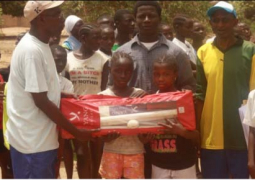