A man raped a three-year-old girl? A 60-year-old woman goes missing? These are alarming incidents, but the former is even more alarming. It is a stuff of fiction, or even sounds more like a fairy tale. But as the story goes, it happened right before our very eyes in Barra. What on Earth would drive anyone to have carnage knowledge of a three-year-old girl? Since this matter is already before a competent court of law, we would let the law take its course.

Like the family of the 60-year-old missing woman, we are disturbed by this unfortunate incident. She told her family that she was going to Serekunda since 12 August (over one week now), but they have been waiting in vain since then for her return. She is said to be strong and healthy, and is not known to suffer from any mental ailment. We can imagine the agony of the family, as they wake up and go to sleep every day hoping against hope for the returning of their mother, grandmother, sister and aunt. It is debilitating and heartbreaking!

So far, all the police stations in the Greater Banjul Area have been alerted about the sudden and mysterious disappearance of the 60-year-old Fatou Leigh. Apparently, they are doing their utmost to get to the bottom of the case. To succeed in this task, they need the cooperation of everybody. And we are doing our bit by drawing attention to the matter - which is part of our social responsibility. But the search should also go farther a field, combing through all the nooks and crannies of the country to ferret out the old woman.  It is our hope that she is found and reunites with her family within the shortest possible time, preferably to join them in the Ramadan.

That notwithstanding, both incidents should put every law-abiding citizen on the alert as to the strange times we are living in. These are times that call for vigilance on the part of everybody. Nothing should be taken for granted; parents should be even more mindful of the whereabouts of their children and of the companies they keep. And children should also be trained to refuse favours from strangers. It is better to be safe than sorry!


"Man seeketh in society comfort, use and protection". 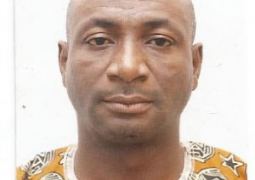