State Counsel Patrick Gomez on 11 February, 2020, opposed bail before Justice Amina Saho-Ceesay of the High Court in Banjul for the executive members of 3 Years Jotna.

Reacting to his opposition for bail for Abdou Njie, Ebrima Kitim Jarju, Sheriffo Sonko, Hagi Suwaneh, Fanta Mballow, Karim Touray, Yankuba Darboe and Muctarr Ceesay, Counsel R. Menday told the court that they have been served by the state with affidavit in opposition which was defective. She noted that the defence has filed affidavits for all the accused persons to be granted bail. She referred the court to the Evidence Act Court Schedule 7.

She submitted that perusing the affidavit in opposition, it was apparent that the state has agreed or accepted the originating summons filed by the defence. She said that there was nothing in the affidavit in opposition denying the originating summons to grant bail. She went on to say that the state was deemed to have admitted all the averments deposed by the applicants. “The argument by the state that the application for bail has been overtaken by events has no basis in law,” she argued.

She stated that if the court wished the defence to argue on bail application in detail, they would ask that the application for bail be granted based on the averments. At this juncture, she cited a Nigerian case to support her argument. “The accused persons are presumed innocent until proven guilty. The burden to prove that the accused are not entitled to bail rests on the prosecution,” she told the court.

She adduced that the prosecution had failed to provide the court any facts or evidence which would convince the court to refuse bail.

At this juncture, he referred the court to the affidavit of Muctarr Ceesay and noted that the court would observe that paragraph 7 of Court Schedule 7 was complied with. He said that on the last page of the affidavit , the court would observe that it had been signed by a Commissioner of Oath. He argued that there was no requirement that the signature of a Commissioner of Oath should be on the left side of the document. He cited Section 87 of the Evidence Act to convince the court.

“The defence does not argue that the affidavit is not sworn by a person duly authorised. I urged the court to accept the affidavit,” he said. On the averments, he argued that the law on application on affidavit was clear. He added that it was settled that even if a party does not file an affidavit in opposition, it does not mean that the party is conceding the application.

“There are two possible situations. One is that the party may rely on the facts or averments in the affidavit filed by the applicant or to respond on points of law,” he stated.

Counsel Patrick Gomez will further argue on the opposition of bail on 14 February, 2020. 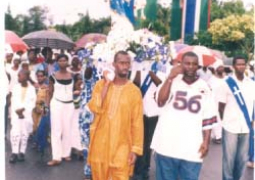