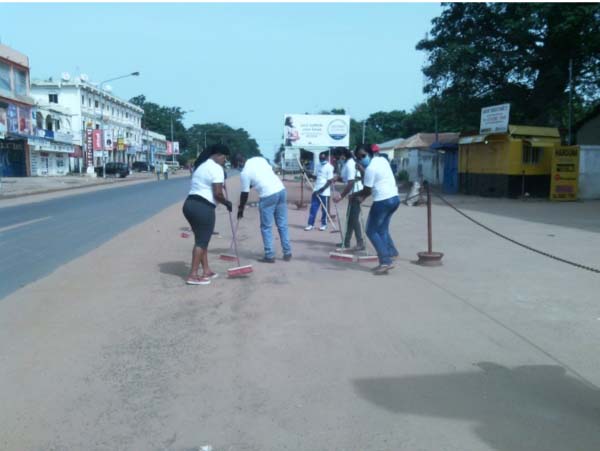 Staff of Standard Chartered Bank on Saturday embarked on a cleansing exercise on the highway from Westfield to Churchill’s Town.

At least 30 staff members of the bank participated in the exercise which was held as part of the bimonthly national cleansing exercise commonly called set-settal.

Malaika Ashcroft, product manager at Standard Chartered Bank, said apart from participating in the exercise, the other reason the company came out was to give some items to the National Environmental Agency (NEA) and also enlighten people about the United Nations’ 17 global goals called the Sustainable Development Goals (SDGs), launched on 21 September this year.

Ashcroft told reporters that one of the aims of the SDGs is to eradicate hunger in the world by the year 2030.

The Standard Chartered Bank official said the bank had been participating in the national cleansing exercise for long and had a long standing relationship with the NEA.

Last week, Ashcroft noted, the bank extended a helping hand to St John’s School for the Deaf and Hard of Hearing by giving donation of “food” to the students.

“This was all part of our corporate social responsibility and we are involved in a lot of community activities across various sectors in this country,” the senior banker said.

Dodou Jallow, manager of Environment and Sanitation at KMC, thanked Standard Chartered Bank officials for their participation in the cleansing exercise, saying the bank had been participating in other areas of environmental protection, such as tree planting.

The Call For Intervention