Supported by the Food and Agriculture Organization and the WWF, the meeting, held at Sanyang Nature Camp in , West Coast Region, brought participants from all over the regions

The national conference of the All Gambia Forestry Platform has been designed to support the establishment of the national committee responsible for supporting the implementation of the forest policy, to promote the Gambian community forest concept, to strengthen the capacity of the stakeholders and to encourage the protection and conservation of the forests.

In his speech, the President of Komfora, Saikou Janko, expressed appreciation with the participants for attending the all-important national conference.

The All Gambia Forestry Platform was officially launched in October of 2011 with support from the Food and Agricultural Organization of the United Nations and the National Forest Programme-facility to support the protection and conservation of forest cover as mandated by the Ministry of Forestry and the Environment.

As a community-based organization Komfora has been dedicated to the protection of the forests within the West Coast Region of The Gambia since 1998.

The association did respond to a call for proposal and was assigned the responsibility to establish the All Gambia Forestry Platform.

Based on this task, Komfora mobilised a team of technical consultants to support and facilitate the four-phase process that has been diligently worked on for the past four months.

He asserted that today gathering is gear toward celebrating the official opening ceremony of the National conference of the All Gambia Forestry platform.

For her part, Sirreh Njie from Food and Agriculture Organization, deputizing the FAO Country Rep, said Komfora benefited from the National Forest Programme Facility through the FAO in August 2011.

The main aim for the National Facility Programme for Komfora was to contribute to the organization’s objective of supporting the establishment of All-Gambia Forestry Platform to strengthen stakeholders’ capacity and coordinate their efforts towards the successful implementation of the Gambia National Forestry Programme.

Madam Njie added that the Platform was envisaged to address one of these objectives and to strengthen the capacities of the stakeholders in order to achieve sustainable forest landscape management.

She finally thanked the department of forestry, NACO, and Komfora for the role they have played in the establishment of All Gambia Forest Platform.

For his part, Sarjo Fatajo, who spoke on behalf of the director of forestry, said this year marks the first year the department of forestry under the auspices of the Ministry of Forestry and the Environment has led The Gambia to the dining of the Silver medal in the 2011 future award by the World Future Council and International Research Organization in New York.

He said the current forest policy has placed emphasis on bringing to under 30 percent the total land area covered with forest and 75 percent of this area to be sustainably managed with the help of rural community. 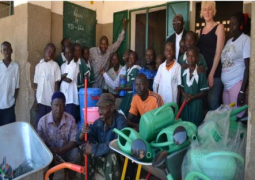