Defense counsel Batchilly and ASP Mballow on 8 September 2015, argued before Magistrate Gomez of the Kanifing Magistrates’ Court over an application made by the defence for one Alhagie Sanyang , a prosecution witness, to produce a police report before the court.

Alhagie Sanyang was testifying in a case involving one Amadou Touray, who was charged with stealing a motor vehicle, an allegation he denied.

Alhagie Sanyang testified that he lives at Wellingara and is a police sub-inspector, attached to the serious crime unit of the police force, adding that he recognised the accused, Amadou Touray.

Mr Sanyang told the court that on 3 February 2015, an executive directive was received from the Office of the President for the police to conduct an investigation into the activities of Technical and Vocational Education and Training Authority.

Mr Sanyang further stated that during the course of the investigation, the accused availed them a letter from the Embassy of the Republic of China which was denouncing the withdrawal of the project vehicle.

ASP Mballow then applied to tender the said letter, and the defence counsel did not make any objection.

The letter was shown to the witness who confirmed that the said letter indicated that the Republic of China was withdrawing the vehicle, and handed it to the accused.

The letter was admitted by the court.

Mr Sanyang further told the court that they wrote to the licensing department to ascertain ownership of the vehicle.

A letter written to the licensing department was shown to him, which he identified.

He said they received a response from the licensing department, giving them the details of the vehicle.

The defence counsel did not raise any objection and the documents were also admitted by the court.

Mr Sanyang further revealed that the vehicle, whose registration number is BJL 5271 G, was registered under the National Training Authority, adding that there was no record of such transfer of the vehicle from NTA to any other person.

He testified that after his findings, they concluded that the act of holding onto the project vehicle without the consent of NTA, as the owner of the vehicle, amounted to stealing the vehicle.

Mr Sanyang stated that they prepared a file for the accused to be prosecuted.

Under cross-examination by the defence counsel, the witness told the court that the investigation team was a panel, and he was part of it.

At this juncture, lawyer Batchilly applied for the investigation report to be produced before the court by the police authority at the next adjournment date.

ASP Mballow objected and said the application was not supported by law, adding that the defence counsel had not laid a proper foundation for the police to produce the report.

He said that the court was not furnished with any authority by the defence counsel for the disclosure of the report.

ASP Mballow further stated that communication between the witness and the police authority was regarded as departmental communication.

He referred to some authorities to support his argument.

He further adduced that departmental communication should not be disclosed, adding that they could not produce what they did not have.

He argued that the court does not have jurisdiction to order the disclosure of the report.

He stated that each court is vested an inherent jurisdiction and it can use this jurisdiction to make an order, and cannot allow a technicality to stand in the way of justice.

The defence counsel further argued that the proper foundation was laid and questions were asked, adding that the witness said that the report was sent to the police authority after the investigation was completed.

Lawyer Batchilly added that documents that would help the court to arrive at justice are relevant.

He cited some authority to support his argument.

It is trite law that a trial should not be by way of ambush, adding that the report was relevant.

“Why they don’t want the defence to have a look at the report?” he asked.

He urged the court to disregard the objection made by the prosecution.

Magistrate Gomez is expected to make a ruling on 17 September 2015. 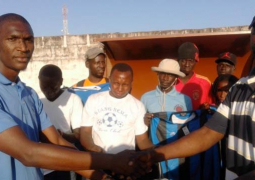