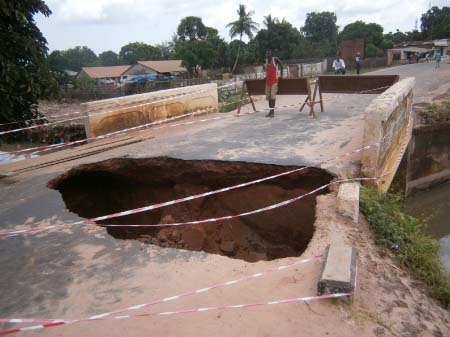 The bridge linking Latrikunda German and Manjai commonly called ‘Kotu-Silo’ sustained damage and was rendered impassable amid heavy rainfall and floods on Friday.

The rain, which started Thursday evening and continued throughout the day on Friday, caused enormous damage to households and roads, rendering them impassable.

Flash floods that followed later on cut off a section of the small bridge, rendering the busy highway impassable.

Heavy floods across the country have caused havoc to many households and claimed lives, the latest of which was that of an 18 year old boy in Gongoro village in the Lower Saloum district of the Central River Region North last week.

Kebba Mbanga met his death after flood waters washed him away.

Ex-Information Minister Janneh, others to appear at High Court