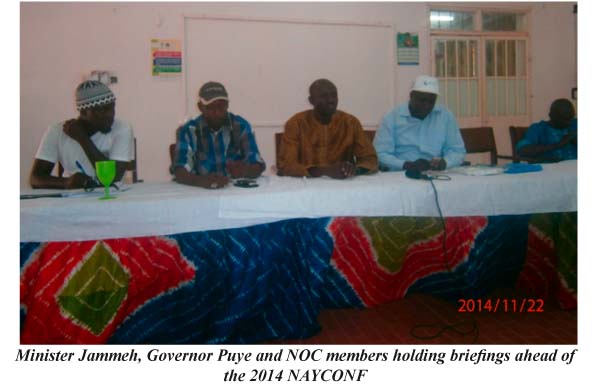 Minister of Youth and Sports Alieu Kebba Jammeh Saturday visited CRR and LRR to inspect the level of preparations of the Regional hosts of the 2014 National Youth Conference (NAYCONF) celebration slated for 12 through 24 December at Soma Primary School, Lower River Region.

Jammeh with the National Organizing Committee and members of his ministry had the opportunity to inspect the ground, escorted by the regional governor and his delegates.

The occasion also witnessed presentations of the national organization committee’s activity reports as preparations for the celebrations unfold systematically.

In a press briefing held at the Regional Education Directorate in Mansakonko, Minister Jammeh told delegates that it was prudent for them to see for themselves to ensure that everything is in place and to address them together.

He thanked the governor and his region for his preparatory report. He commented the chiefs and youth for their collaboration and solidarity.

The dialogue with government and young people are relevant issues for the welfare of the young people, he said, adding that the government does not only listen but it will also take the issues on board together with young people to deliver. “NAYCONF is a significant occasion,” he told the gathering.

He said the challenges and expectations are high, considering hosting the expected number of people during the celebration.

Describing the 2012 NAYCONF achievement in Bansang, he urged the governor and his region to redouble their efforts to surpass the previous achievement in 2012.

He urged the region to put their house in order before the slated date, revealing their expectations to receiving delegates from sister countries for the celebration.

He further tasked all assigned committees to work effectively for the success of the celebration.

“We are not going to compromise security and health,” he said, raising the issue of welfare of the people, especially as regards the Ebola virus.

He said they are working closely with the health ministry and the World Health Organization to ensure all participants coming for the celebrations are properly screened.

“I am going to work closely with health ministry to ensure that all participants are regularly screened,” he said.

He also urged the NEA to ensure the ground is not filtered during the celebration.

LRR Governor Salieu Puye thanked the minister and his delegation for their support while assuring them of their collaboration and good preparation for the national event.