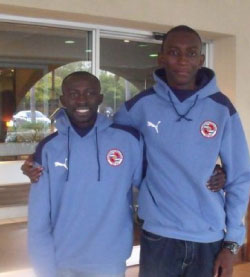 Sports Abdoulie Bah of West Coast Radio and Lamin Drammeh of The Point newspaper have left Banjul to attend the 5th IOC World Conference on Women and Sports hosted by Southern California Committee for the Olympic Games in Los Angeles, USA.

The two sports journalists, who bagged the 2009 Sports Broadcaster and Writer of the Year awards respectively, are attending the event on the invitation of the International Olympic Committee (IOC) and the United States Olympic Committee.

Drammeh, deputy head of sport at The Point newspaper, left Banjul in the early hours of Tuesday via Casablanca and New York, while his close friend and colleague, Abdoulie Bah, producer of sports programmes at West Coast Radio, departed Banjul early Thursday morning.

The IOC organizes the World Conference on Women and Sport every four years with the objective of analyzing the progress made within the Olympic Movement and identifying ways to improve and increase the participation of women in the world of sport.

The programme will include breakout sessions, cultural events, keynote speakers and forums.