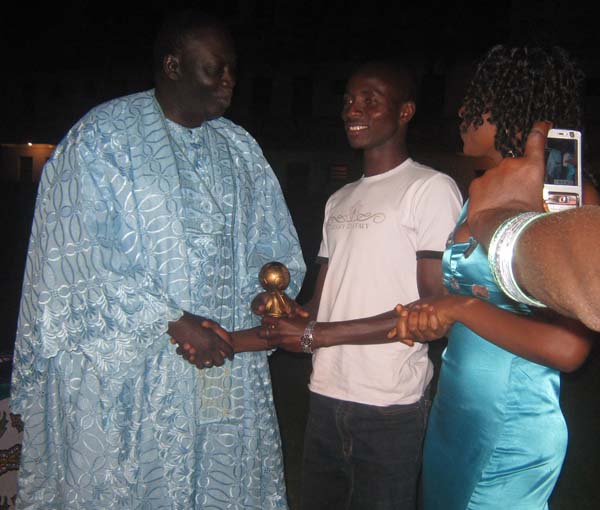 The Sport Journalists Association of the Gambia, on Friday April 30th honoured outstanding sports personalities in the country during its second edition of the National Sports Award, at the Independence Stadium Friendship Hotel Garden in Bakau under the watchful eyes of the Honorary Father of the Association and the Managing Director of The Point Newspaper, Pap Saine, among other high profile dignitaries.

Malang Tamba was awarded the most outstanding Paralympic player of the year 2009, while the Gambia Sportsman of the year went to the U-17 team.

The most outstanding football coach of the year 2009 went to Peter Bonu Johnson, the Head Coach of the Gambia Ports Authority, who are currently 6 points clear on top of the GFA Division One League Championship has guided the ferry boys to a place in the First Division following their relegation to the Second Division in 2007\08 season.

The best local player went to Lamin Sarjo Samateh of Samger FC, while Fatou Kenneh Jeng was awarded the most outstanding female player of the year 2009.

The most outstanding foreign-based player was awarded to Tijan Jaiteh, while the special award went to the National Scorpions fans club.

Lamin Drammeh, the deputy head of sports desk of the Point Newspaper was awarded the most outstanding male journalist of the year award, while Isatou Bittaye of Foroyaa Newspaper won the female category.

The most outstanding Broadcaster of the year 2009 award went to the sports producer of the West Coast Radio Abdoulie Bah.

The Sports Journalists Association of the Gambia Football team were pronounced winners of the late Fatou Mbye Memorial Football Tournament, and thus received the trophy at the end of the 8 team tournament.

The late Fatou Mbye, a colleague in the media who has devoted the entire part of her life in the field of sports was awarded the posthumous award, which was received on her behalf by her brother.

The association also presented D5, 000 to the late Fatou B.K. Mbye, as part of the proceeds realised at the end of the tournament.

In his welcoming remarks, the President of the Sports Journalists Association of the Gambia, Namory Trawally said the ultimate aim and objective of the award was to encourage and recognise the efforts of sports men and women, who over the past 12 months have been very much outstanding in the development and promotion of sports in the country.

Trawally, who expressed his association's intention to stage the event annually, thanked Pap Saine and all those present at the award ceremony.

"Sports Journalists Association of the Gambia would do everything possible to see to it that the award is held annually in our quest to continue recognising the effort of sports men and women in the country since they remain the key to the success of our sports," the association's supremo pointed out.

Namory, who has registered numerous successes since his appointment as the association's President further used the opportunity to thank the managers of all media houses, especially Mr. Pap Saine for the support they have been rendering to the association. He was however full of praises for the impressive GRTS reporter, Lamin Jaiteh who donated all the trophies for this year's award ceremony.

Dodou Bojang, the Chairman of the award committee congratulated the nominees of the award for what he referred to as a success.

"There is no loser as far as the nominees are concerned because making it to the final list of 3 alone is fantastic recognising that one could be proud of," says the sports editor of the Gambia Radio and Television Services (GRTS), who doubles as the 2nd Vice President of the Sports Journalists Association of the Gambia during his speech at the occasion.

Bojang, a globe trotting journalists with a wealth of international experience used the platform to commend the effort of the award committee, adding that they have always been there to make sure it happens.  He therefore urged them to continue working hand-in-glove for the development of the association.

He finally urged the business community to help the government in achieving excellence in sports.

"The business community should take this award seriously, because we have always been there for you so why can't you also give us the necessary support in our endeavours. Whether high or low key, we will go on to stage this annually event," he stated.