Speech delivered on the Occasion of the International Day for the Elimination of Violence Against Women Organised by the Delegation of the European Union and UN Organisations in Banjul, by Dr Isatou Touray, Executive Director, GAMCOTRAP

As we celebrate the International Day for the Elimination of Violence Against Women, I would like to take this opportunity to urge all of us to reflect on the many abuses that women are subjected to every second of every day.

Allow me to put this in perspective. I was asked to speak for five minutes, and I regret to say that, during these five minutes, at least five women will die in childbirth resulting from reproductive health complications, some of which are caused by female genital mutilation. Multiple women face assault every second, so while I speak, more than 300 women will experience some form of sexual or gender-based violence. Women and girls will be raped, girls will continue to be mutilated, and children will be married off, depriving them of a valued education. Many women are denied their rights and their illiteracy makes them even more vulnerable.

I just spent eight days in the most remote areas of the Upper River Region of the Gambia and what I witnessed was deplorable. I would like to focus on three of these issues today.

First, FGM: More than 133 million girls and women have experienced some form of FGM in the 29 countries in Africa and the Middle East where the harmful practice is most common. Beyond extreme physical and psychological pain, girls who undergo FGM are at risk of prolonged bleeding, infection, infertility, complications during childbirth, and at times death. This is especially evident in the Gambia, where there is no law to protect these girls and where efforts to eradicate this practice rest on the shoulders of a few NGOs in the country. I met a circumciser in Sabi Koromba who has circumcised 100 infants. In explaining her procedure, she says she removes the entire clitoris because she believes that, with it in tact, women are incapable of having sexual intercourse. She removes the labia minora because she is under the impression that they cause men extreme pain. And she seals these children to prevent promiscuity. The sexual and reproductive health of our girl children is in the hands of people who lack the basic knowledge of its anatomy and physiology and who feel that the practice must continue just to fulfill the man’s desires. It is crucial that we give due attention to this issue, as there is need for more informationon the impact of this practice, not just on the woman but on the family, community, society and the country at large. The state must take its responsibility to protect the girl-child from such a degrading and inhumane practice.

Second, early marriage: Worldwide, more than 700 million women alive today were married as children. More than one in three—or some 250 million—were married before 15 years old. I saw so much of this in the villages of URR. Countless girls who were forced to marry and stripped of even the possibility of getting a basic education. Is this really what we are accepting for our children? That they are deprived of quality education and spend their lives being dependent on a likely abusive husband? That they are sexually violated? Thatthey are unable to negotiate sex, leaving them highly vulnerable to sexually transmitted diseases and assault? That they are at a much greater risk of problems during pregnancy and childbirth because they are not physically mature enough to give birth? We must work tirelessly to empower our girls! We must live up to our obligations to protect the girl-child.

Finally, rape: Despite our efforts, it seems as if rape is as rampant as ever, if not more. Rape in marriage, rape of children, rape by men who are supposed to protect victims of such atrocities.Young girls are raped and this is justified by men who claim it is okay because she is his wife. What kind of world do we live in, where culture is used to justify this act, victims are punished and perpetrators go about as if nothing even happened? Is this not impunity?

We must stand up to these injustices. We cannot stand by with indifference as women in this country are treated as property, as they are degraded and tortured. It is also crucial for us to remember our counterparts in the rural areas who continuously live under threats, fear, physical, mental and psychological abuses and continue to see it as destiny.

Colleagues, it is crucial that we treat every day as a day to eliminate violence against women in order to uphold women and children’s rights; in order to protect this nation’s greatest resource; and in order for gender equality to be meaningful. We must do so in the name of acquiring human rights for everyone and in the name of sustainable development for the Gambia.I urge all of us to commit ourselves to a revolution. My revolution is, until FGM ends, I will continue to raise my voice to raise awareness about the harmful effects of FGM.

In conclusion, I urge all of us to please raise our voices during this campaign and raise awareness about the devastating impact of violence against women in the Gambia.

My mind harkens back to the incredible women who led the way for equal rights for women and I urge my fellow women’s rights champions, men and women tocontinue this work and say no to violence. 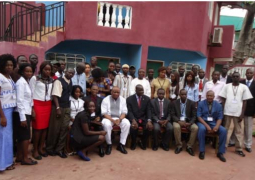 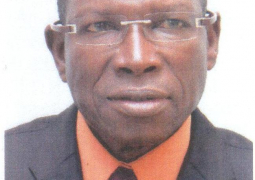