Spanish Judges sentence Gambians to 12 years in jail for FGM

Female Genital Mutilation commonly known as FGM is now becoming more of an issue not only in the United Kingdom, but also in other parts of Europe, especially within the West Africans including the Gambian community.

Some argued that it is a tradition they vowed to preserve, thus in constant conflict with the law. The issue is sometimes emotional and vocal, especially in the vibrant media here, but not until recently when it started to gain momentum in the courts.

A panel of judges at the Provincial Court in Barcelona, Spain, has proven the latter and unanimously ruled that two Gambian nationals were ‘criminally responsible for the ‘clitoridectomy’ that was performed on their two daughters.

Interestingly, the Gambians lived in Spain for about 20 years, but due to their ignorance of the law or the strong believf that such tradition cannot die a natural death, some decided to take the risk within the borders of the EU.

Both parents in fact denied knowledge of ‘what happened’ and ‘not aware that such a practice was illegal in Spain’.

Nonetheless in delivering judgment, the judges emphasised that ‘FGM is not a culture… It is mutilation and discrimination against women’.

FGM a matter still widely treated as taboo in such communities is currently talked about in the open, as some West Africans and other Africans across the continent are reluctant to stop the practice and are doing all what they could to evade the authorities and perform it underground.

In contrast, others are unwilling to return to their home claiming to be in fear that their female children will be circumcised. Whatever the case, the bottom-line is FGM is considered not only ‘unlawful’ here, but also ‘prohibited’ and ‘barbaric’.

The jailing of the Gambians is considered to be so far the toughest in Europe against, both parents Binta and Sekou (second names concealed by this correspondent for privacy reasons) because they were sentenced for 12 years.

They will serve six years for each ‘crime’. The court was also amazed to be informed that the Gambians ‘knowingly and deliberately’ mutilated their young daughters through a person of ‘unknown identity’.

The judges noted that evidence provided proven beyond reasonable doubt that the event ‘must have occurred on Spanish soil and not on a visit to Gambia, and that the parents were aware it was illegal’.

The court also confirmed that the parents were not out of the country during the said period, and that they were reportedly warned by social services who visited them earlier and discussed the issue of FGM. It added that their mother had promised not to perform it.

The judges also admitted the ‘inevitable clash of culture’ that occurs with migration, but concluded that ‘respect for cultural traditions must be limited against the respect for human rights as universally recognised’.

For this reason, a legal practitioner in Madrid, Spain, who contacted The Point regarding the issue said: “This is crucial... People’s traditions are respected, but must be within the context of the law...”

A few days ago, another Gambian lost her legal bid to stay in the UK over FGM. The 37-year-old woman (name withheld by this correspondent for her privacy), claimed to bea member of a certain tribe (also withheld for the same reason) and wanted to protect her young daughter, but her claimed was turned down following an intense legal battle by her solicitors.

Whatever the circumstance or outcome, it is clear that currently there is a serious clash between a long and ‘deep rooted tradition’ and ‘human rights’.

Due to the fact that Gambians are well known to be law-abiding, respectful and hard working, in order to avoid such a clash, it will require a serious and open debate with a respectful tone, as well as comprehensive education for those who are ignorant of EU law or regulations governing such practices.

Also prominent Gambian lawyers and other African legal practitioners are available here for any legal advice regarding these matters, and thus it is essential to consult them prior to any important legal matter to be adventured. 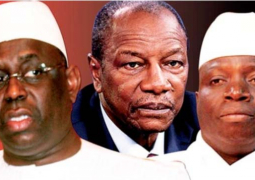