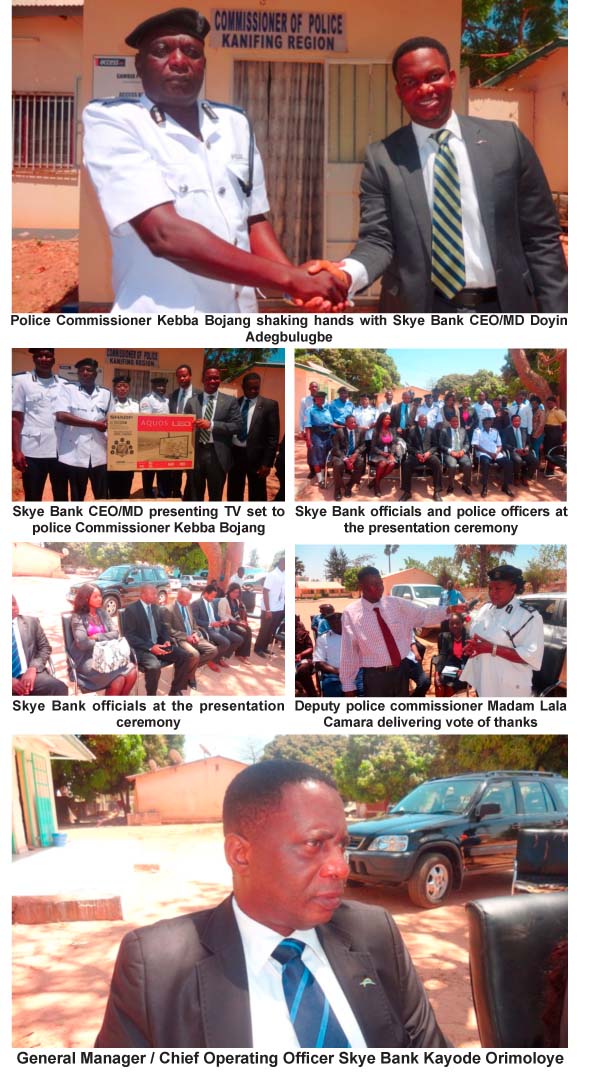 The presentation was in recognition of the commitment and dedication of the Gambia Police Force to public service and to the Gambian populace.

Speaking at the presentation ceremony, Skye Bank’s CEO/MD Doyin Adegbulugbe said the gesture was as a demonstration of the bank’s appreciation of the Gambia Police Force for its selfless service to the general public.

MD Adegbulugbe said the police are very important in any society, because they enforce law and order; hence must be given maximum respect and support to carry out their duty.

“If there is no law and order, you cannot appreciate the society. If we do not have a peaceful society, we cannot do business,” he said, adding that there is a direct relationship between what the police do and what they as a bank do.

“We cannot exist without the police. So we always have to appreciate what you have done,” the Skye Bank MD told the Gambia Police Force.

“What we are giving to the police force was just a token of appreciation to demonstrate our respect for and relationship with the police,” he said.

The Skye Bank MD assured the Gambia Police Force of the bank’s continued support to their service to the nation.

This was not the first time the bank was rendering support to the Gambia Police Force, MD Adegbulugbe said, and he thanked the police for their effort at protecting the life and property of the general populace.

The Skye Bank MD further commended the commissioner of police at the Kairaba Police Station, Kebba Bojang, for his commitment and dedication towards the Gambia Police Force.

In receiving the items, Commissioner of Police Kebba Bojang said the police are dedicated towards serving the public to maintain peace and security, as without these there would be no meaningful development in the country.

He said since banks are operating in The Gambia to serve the people and help the economy of the country grow, the police have to stand firm to ensure there is peace and security in the country.

“It is our collective responsibility as security to make sure that there is conducive business environment in the country,” police commissioner Bojang said.

He commended the bank, saying the donation was a “good gesture and timely”.

“We are hoping for a continued partnership with Skye Bank Gambia Limited,” he said.

Giving the vote of thanks, the deputy police commissioner, Madam Lala Camara, said that on behalf of the Inspector General of Police and the senior management of the Gambia Police Force, she would like to thank the Management of Skye Bank Gambia Limited through their Managing Director for the gesture.