The Athletics qualification which was hosted by Dakar from 15th -16 May 2010, attracted interest of a total of 10 West African countries, including the host Senegal and the results of the qualification has seen the country's young talents edged out some of the finest athletics during the qualification.

The six athletes who have since returned home, has also made names for themselves having finished the qualification with something to be optimistic about.

Fatou sowe is undeniably one of the fierce-looking young athletes the country has ever produced. It was not a surprise to learn that she was able to put in a respectable performance, as she came out second in the 100m girls heat 1 with an impressive timing of 12.50Q, which eventually saw her book a place in the final.

Sowe continued to make a huge impact in the qualification as she went ahead to secure 3rd spot with a timing of 12.48 in the 100m girls final.

There were good finishes for five other Gambian athletes, such as Momodou Lamin Kujabi, Ousman Gibba, Ebrima Saine, Omar Jammeh and Gina Bass, whose wonderful performance saw her finished 2nd in the 200m girls' heat with a timing of 25.6Q.

Sports Journalists association of The Gambia's most outstanding athlete for the year 2009 Momodou Lamin Kujabi, was also so instrumental as he occupied the second spot in the 400m boys heat 1, with an impressive timing of 49.93, while his comrade Ousman  Gibba finished 2nd in the 200m boys final with a good timing of 21.88.

Meanwhile, the full results are listed below- 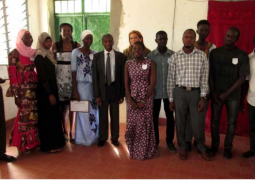