Hard knocks raining on my madam's door woke her from a dreamless sleep. She had been indoors for ages and only comes out when necessary.

And the usual feeling after an incident downed on me. I felt empty and my mouth had a bad taste after remembering what she went through in the hands of her husband, last night. I peeped through the key-hole just to make sure she was not dead.

I breathed a sigh of relief the moment I saw her slowly rose from the floor (it seemed like she slept there) and brought the blinds apart to reveal a bright new and promising day - perhaps a lucky day for all of us, I told myself.

At that moment I couldn't think of another family I had, but this one.

Still I knocked persistently after waiting for some minutes. I could see surprise written all over her face the moment she opened the door. I bet it hadn't occurred to her that I would be the one knocking because her housemaid Ndella always did.

To break the deafening silence, I spoke immediately with an irritating twitch on my face, 'madam, wetin happen? I no see you yesterday and today self. It is already past lunch time.

'A-a,' she said, surprised that she would be sleeping up to that time. She looked for the time on her wrist forgetting that she wasn't wearing any.

'What time is it Solomon?' she asked forgetting that there was a wall clock on the wall opposite her bed.

'Three o'clock,' she repeated the word absent-mindedly and tightened the head –tie on her head with a soft wince after touching the sore on her temple.

'Sorry-o,' I said with downcast eyes.

'Thank you; tell Ndella that I would be coming down for my lunch.'

She closed the door after I left.

I know that even after she comes down, she wasn't going to eat. My madam's appetite took a holiday the moment her husband started maltreating her. I sometimes wondered why an intelligent career-woman like my madam was still stuck with such a man.

He would bang on the door at ungodly hours and she would be always willing to see him home because she could not sleep without him. She would keep on counting the hours till his return. By the look of things, he intended to make her life a living hell. Yesterday night, when he was drunk and seemed to soak in alcohol, he came into their room ranting and raving trying to pick a fight with her at the slightest chance. She couldn't help it, but join in. It was a heated argument. As fast as lightening, his hand landed across her face and before she could save herself, he reached for her and held her neck in his strong hands. He tried to strangle her and she gasped for air. Her breathing became labored and her beautiful eyes opened trice their size. I tried to save her, but the door was locked. I ran to their opened window and peeped. I was ashamed because I couldn’t help her, but wished to God to save her. She frantically kept kicking her legs in the air, but he seemed to overpower her and eventually became helpless beneath him. He kept cursing and kicking her until she seemed lifeless. She panted and occasionally managed to scream for help. Ndella and I came knocking on their door, but it was locked. We could do nothing, but listen to her heart-breaking whimpers. Ndella rushed to call the police, but they were a mile away, they would probably come at a later time, I hopelessly thought. Just when I thought that she was going to meet her maker, she jabbed her captor in the ribs and he tipsily fell on the floor. With a whoosh of air, she made for the door and unlocked it. How she went out of that door, I did not know. We rushed toward her as she fell on our arms. We quickly took her to the kitchen where we made her some hot tea. She cried uncontrollably despite the comfort we offered her. She was shaken to the bone.

We have come to love madam like our very own sister since the day we started working for her and we only hope that the good lord will save her from the clutches of this cruel man. 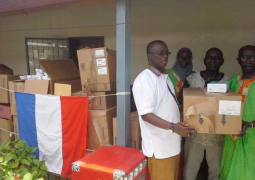