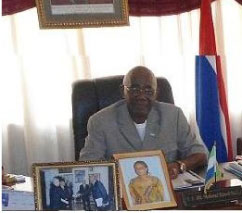 His Excellency Alhaji Mohamed Kemo Fadika, Sierra Leone High Commissioner to The Gambia, has reiterated the cordial and bilateral relations between his country and The Gambia, saying Gambians and, by extension, all nationals, are welcome to Sierra Leone.

He made this statement on Saturday 29 December 2012 at a rally held at Latrikunda Lower Basic School on Kairaba Avenue after a long procession from Buffer Zone in Tallinding, in celebration of the recent electoral victory of the All People’s Congress party of Sierra Leone.

Sierra Leone held its presidential, parliamentary and local government elections on 17 November this year, which was won landslide with 58.7% by the incumbent APC party led by His Excellency Ernest Bai Koroma, as against the 37.4% of the votes polled  by the strongest opposition Sierra Leone People’s Party (SLPP) led by Rtd Major General Julius Maada Bio.

HC Fadika said the APC is a party of the people of Sierra Leone hence its landslide victory in the November Polls that have re-elected President Koroma and his APC party for the second time to steer the affairs of Sierra Leone.

He said the APC has come in again with another develop[mental programme called Agenda for Prosperity after the Party’s Agenda for  Change has successfully transformed Sierra Leone and its people for the better, as promised by the President in his first five-year term.

“We have delivered in five years; and we are going to do more, based on the development that has been registered and as we continue to work for Sierra Leone, the people are ready not to sacrifice the APC for any other political party, and they are ready to vote for us again for the next 15, 20, to 40 years to be in political authority. We are going to work arduously, assiduously, courageously as a party and the President is dedicated to ensuring that Sierra Leone prospers within the years 2012 and 2017.”

Other speakers on the occasion were APC Gambia  Branch chairman Mohamed Osman Kamara, and APC Party adviser in The Gambia, Sheku Kamara.

Statement by Hon Chief Justice A. K. Savage at the Enrolment of Legal Practitioners on 16th October 2008,High Court Room No 1