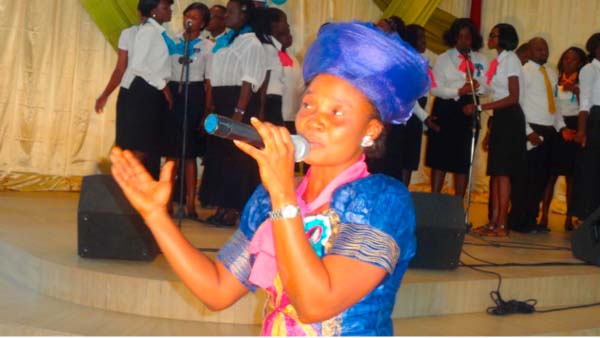 Phebian J. Musa, a young Sierra Leonean female artiste, on Sunday launched her second album at the Assemblies of God Church in Kanifing.

The album entitled ‘Unchangeable God’, is the second set of tracks, the young talented artist has released in The Gambia within a short period of time.

The launching was characterised by singing and dancing, with various artistes performing on stage to showcase their talents as they touched the lives of many to change their mindsets for good and to also adore the worship of God through music.

In her remarks at the launching ceremony, Phebian J. Musa praised God for giving her the vision, wisdom and strength to produce her latest album.

She said her joining the field of music was an inspiration and motivation by the Lord.

“First and foremost I am a believer; I came into music through the calling of God, as it was destined by the Lord that I would venture into this profession,” she said.

“I didn’t just jump into it but God himself called me to worship him with my voice; so I came into the music ministry by the grace of God; therefore I appreciate God for that because He has led me to the right path. I am so grateful to God,” she said.

Phebian went down memory lane, saying that she actually started singing when she was three-year-old. Therefore it was so befitting that the calling by God is being realised today, having produced two inspiring musical albums – the first called ‘Love God’ and the latest one: ‘Unchangeable God’.

The young talented gospel singer, born in 1983, said she would continue to serve God fervently and always be on ‘fire’ for the Lord.

She said: “I am preaching the Word of God through song, as it moves life and touches the heart and soul of human beings.

Phebian took the opportunity to thank her executive producers and her pastors for the encouragement and support given to her.

She said the financial aspect of it was a major constraint but through the help of the Lord and good people she was able to realize the production of the album.

She also stated that among the constraints is also the lack of platform to showcase oneself.

“Therefore if you want to be a musician you have to work hard,” she said.

For his part, seniorPastorAnthony Chibueze, the Executive Producer , National overseer of CRM The Gambiaand head of mission,said: “I thank God for seeing us through in producing this album.”

He added: “I would like to advise all and sundry not just to buy this cassette, but to listen to the message and put it into action and let people support the production so that we can produce more.”

He also advised people to buy as many CDs of the album as possible because it is all about the name and work of Jesus Christ.