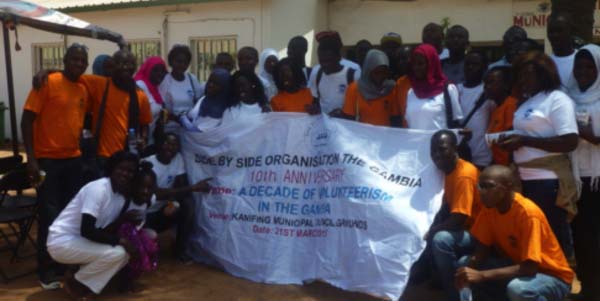 Side-by-Side organization-The Gambia, a registered charitable, non-political and non-profit making youth organization formed on 4 March 2005 in Bakau New Town, Saturday celebrated it 10 years of volunteerism at a ceremony held at the KMC grounds.

The programme was graced by sister youth organizations, as well as dignitaries.

It began as a mission to empower people, especially the under-privileged through volunteerism and community services, he said.

It was founded on 8 March 2005, when a group of few students who were bounded by a common vision set the agenda of a charity to contribute immensely to the advancement of the human race, he added.

These are courageous youths who think they have the obligation to their society, he continued.

Mr Fadera said the journey has not been an easy one, and had been characterized by serious challenges that would have made the organization to fade away.

In the past decade, many organizations emerged with brilliant and innovative ideas to contribute to the development of the society, but unfortunately many could not stand the test of time owing to many factors. However, for them the story is quite the opposite, he went on.

According to Fadera, after ten years, the organization is proud to catalogue a few achievements that it set for itself a decade ago.

As a civil society organization, it has tremendously succeeded in creating a series of programmes that are geared toward uplifting the lives of young people, which includes empowerment of young people in education.

He added that every year the organization, through its partners in the US like the Service for Peace, Universal Peace Federation, and the Family Federation for World Peace creates scholarship packages for under-privileged students and deserving students in The Gambia, with the objective of creating opportunities for all school children to live their full potentials regardless of their status.

Landing Sanneh, the executive director of NEDI, said the youths comprise the largest chunk of the population of this country, and they must be sensitive to the challenges facing young people, and take adequate measures in addressing them.

He added that they must not be complacent to challenges of the young people, because they are realities that they need to address for the good of the future.

That is why they have all efforts put in place by the ministry of Youth and Sports in shaping the future of youths in the country, adding that if they do not work on the youths their future would be bleak.

They needed to promote the development of young people so that the present would be fine, and the future would be the best, he said. 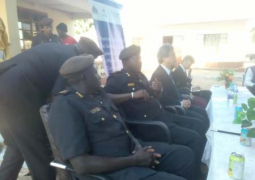 Gambia To Play Iran On Sunday