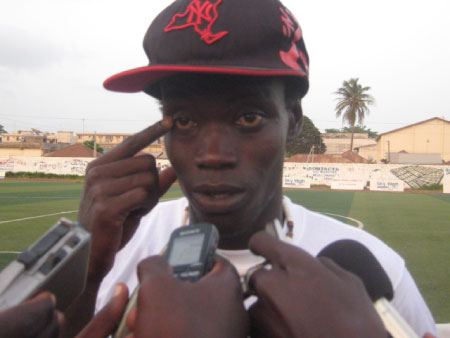 Modou Njie Sarr, top scorer for the 2011-12 Gambia Football Association (GFA) first division league who finished with fifteen goals, has said his aim is to set a goal-scoring record that no other Gambian player will break.

Modou Njie-Sarr, who was speaking to reporters shortly after his side’s (Real De Banjul) 3-1 victory over Young Africans in their final game of the league played in Banjul at the weekend, added that both seasons before last and he was on form but that this season was the best for him with Real De Banjul.

He stated that he really trained hard this season which earned him the goals he scored, adding that, Real de Banjul FC always build their attacks from the flanks and that any time the flank players have the ball he always run to the post to wait for them centre the ball for him to finish.

He also noted that, playing for his Father (Alagie Sarr, head coach of Real De Banjul FC) has also contributed and motivated him immensely.

He said being the leading goal-scorer of the league and not being selected in the senior national team, he feels it is not yet time for him but any day the time is up he will be called and will play for sure.

Buba Sanneh, one of the best and most consistent defenders in the league who also plays for Real De Banjul FC, said he was very happy in a way he has never known of in his life because this was the first trophy he has won since he started playing football.

He noted that, this is his second season with Real De Banjul FC but was full of thanks to God and head coach Alagie Sarr, noting that, apart from God, Alagie Sarr is the one who made him the player he is today.

He said apart from training and relaxing, all he does is concentrate well whenever he is on the pitch and that this is what is helping him in his game.