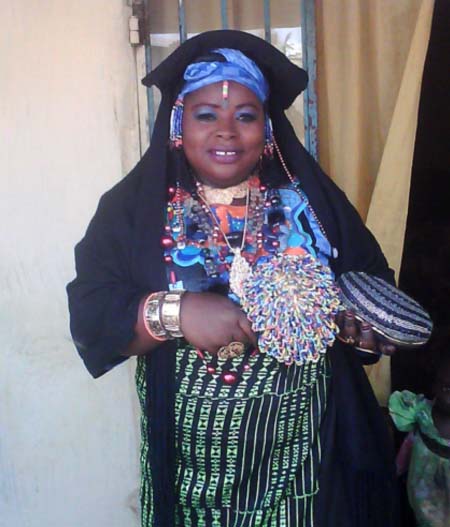 Seeing her coming from afar, you can spot her beads sparkling, jingling, and swinging from side-to-side speaking a language that she alone understands.

Her head is covered with a beautiful, unique traditional plaiting accompanied by beads of different shapes, colours, and texture.

At the back of her neck is my favorite bead called “yoroo”, very long and colourful and attach to the end are two cowrie shells sparkling white.

Her waist to her toe is accompanied by my favorite traditional lapper “darafaano and Faani fingo”.

The earth is even worshipping her every step, and as she makes her way to the market I can see cameras flashing in the air as every photographer wants to take a picture of her.

That was Mama Ceesay, the newly-wedded traditional bride.

As a Gambian, have you ever wondered about some of the cultural practices or items that you see around you daily or during some part of the year.

The Gambia is, no doubt, enriched by the cultures of the different tribes. One such cultural practice that I am always curious about, because it has something to do with women, is the Mandinka traditional wedding called “Manyo Bitoo.”

As the rainy season approaches, the “Manyo Bitoo” season starts.

Sometimes it is amazing to see a woman with more than five children subjected to this practice, and called “Maanyo” meaning a newly-wedded wife.

So, as a Mandinka girl, I became curious as the season approached and the country is invaded by these traditionally well-dressed newly-wedded women called “Maanyo.”

I decided to embark on a research to satisfy my curiosity. On Tuesday evening, I travelled to Farato to pay a visit to Grandma Karamo to have a chat with her on the tradition. I asked questions, and this was what she said to me.

How in our traditions does the mother of the newly-wedded woman prepare “Cambo”, the household material given to her on the day?

Grandma Karamo: It takes mothers years to gather everything that she wants to give to her daughter on this special day.

Mothers will gather materials from the dry season to rainy season every year. After putting together all the materials, that is when the mother will be comfortable that she wants to subject her daughter to the traditional wedding ceremony, and she will take a date.

“Maanyo Bungo”: we look for a bigger house where we will conduct the traditional wedding. For those from Pakau in Cassamance, they usually hide the bride and then, when it is time for the ceremony to begin, those responsible will begin the search for the bride and they will continue searching until they have found her, and bring her to the place where the ceremony is taking place, accompanied by a unique shout.

Then people live in big houses with no small rooms. So we will do it in a bigger house where everyone can fit in. The older women will sit down, while the younger women will stand.

“Then there was nothing like “Muchoo”, a readymade cap that is made with beads and put on by the wedded woman. We have a type of plaiting called “Baa” which is done in style. You plait part of the hair on sideways down to the back of the ears, and a big one in the middle of the head down to the back of the neck. At the end of the plaiting, we insert a small rounded coin.

She continued: “After the plaiting, we will then give the woman a white calabash, that she will use to support her when kneeling down. Then a silver bangle “kodiforo” will be put on her wrists. She will tie a black wrapper around her waist called “Fani fingo”, and then a white wrapper“Mandinka wurundoo” will be tied half way on top of the black wrapper.”

“It is this present generation that uses the traditional wrapper called “darafaano”, but then we used “Mandinka Wurundoo” which was made out of cotton. we will look for cotton, make it and then buy the white thread from the white men, and take it to the one who spins it into the wrapper we called “Mandinka Wurundoo”.

“During our time, we did the traditional plaiting called “baa”, not the readymade cap, and after the plaiting we used a needle and thread to sew the beads on the plaiting which is done by the husband’s sisters.”

She went on: “We don’t sew beads on the calabash then, but that is now part of this generation. Then beads were only tied on the ankles of both legs and on the plaiting on the head, but not on the calabash we used.

“The traditional wedding will start after Isha prayers. It will be accompanied by singing and dancing until at dawn. Then the older women will tell them to take the bride into the secret room, for a tradition called “sondingro”. In that “sondingro”, what happens there is never told and has always been kept a secret from the younger generation,” she added.

Grandma Karamo said, “after the Fajr prayers, the elders will come for the bride and she will sit on the mat, and they will bring a white cloth that will be held by one elderly person, who will be saying something and hold up the cloth above the bride’s head. It is then held down for three times and then placed on her head. Then they will advise the woman on various issues of life and marriage.

“After that, the bride will be accompanied to her husband’s house and the husband’s sisters will push the bride onto the bed.

“The bride will come near the goat or bull, kneel beside with the support of the calabash in her hand and then hold the ears or the horn of the goat or bull, and say “Nkoto” or “Mbaring”, meaning brother or uncle, then she will get up.

“From that day onwards, even if she is was used to calling her husband by his name, she will henceforth called him “Nkoto” or “Mbaring.” She will use the same words to refer to everyone in that compound, even the children.”

“The traditional wedded bride can stay with her traditional outfits for years, if she likes. “Maanyo la Sirinbatoo”, the bride’s maid, is selected from her family and has to be with her all the way,” according to Grandma Karamo.

For Mama Ceesay, her life as a traditional bride is one that is full of joy and blessings as she is never lonely and has people around her all the time.

She told me that it can be difficult to see people running up to you and wanting to take pictures or chat with you; not because they know you, but because they are attracted to you by your traditional looks.

She told me that when she goes to the market to shop, she is showered with lots of gifts, because people believe that traditional wedded women bring good luck with them and if they prayed for you their prayers are always answered.

Looking at her face, one could tell that being a newly-wed brought nothing but joy to her; and one that she will live to remember for the rest of her life.

NOTE: SHE-SHE-SHE deals with issues of women across all sectors of development. So anyone or institution wishing to talk to the columnist on anything concerning women; or If you are a woman with a story to tell on any issue, please send an email to shesheshecolumn@gmail.com or call 2152629.