‘We will go to Zambia’ – Says coach Ceesay 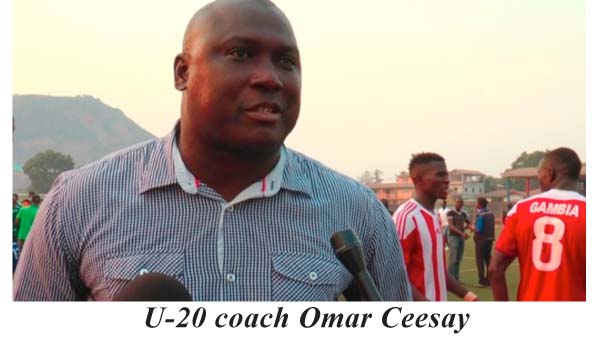 Omar Ceesay, Gambia U-20 head coach, has said his team will go to Guinea Conakry to qualify for Zambia 2017 - God willing.

Speaking to reporters at a press conference on Saturday following his side’s goalless draw with Guinea Conakry in the first leg of the CAF U-20 African Cup of Nations qualifiers played at the Independence Stadium in Bakau, coach Ceesay said, “InSha Allah, we will go to Zambia.”

He added that “the Guineans are not that good opponents”, saying they were sleeping on the pitch and did everything to prevent them.

He said his team “will win in Guinea” in a fashionable style, adding that everyone in Guinea would come to get them at the airport, and they would make Gambians proud by qualifying the team to the tournament proper.

Ceesay said Guinea’s defence line “is not good and their attack is one-way”, adding that the reason the game was tough was because they didn’t know much about Guinea prior to the encounter.

He said they are highly optimistic of positive result but even if they did not qualify they have earned the credibility that they are good enough to play in the qualifiers.

He added that they were supposed to scout and try to know more about Guinea in Senegal but “our neighbours were not fair with us, because they told us the game was to be played on the 3rd when it was actually on the 2nd of July this year.

The U-20 gaffer said he wished his request to the Gambia Football Federation and the Ministry of Youth and Sports is granted, for the team to go to camp immediately after the Guinea game so they could resume training today Monday.

He pointed out that “The Gambia - we are the only team that go back to our various homes after every game compared to the other teams in the qualifiers”.

He also said it was difficult to put the team together to play against Guinea because he, personally as a coach, was not scared of Guinea but was worried because Guinea have players that have played together at the U-17 and U-20 levels.

With that, the Guinean team was supposed to be of better level than The Gambia that only started playing together last November, he further said.

He said his team was unlucky looking at the number of shots on goal they had, adding that if they could push them to penalties in the second leg - although he would prefer winning the game in regulation time - “then Guinea are finished”.

He said that in football “you always work hard and plan for victory but at the end of the day God decides”.

He added that the outcome of the game was a very good one for his side since they did not concede a goal.

“A goal in Conakry can put us on the next level and I have confidence in my players that with the help of God we can win,” he further said.

He said they have scored away goals against better teams than Guinea Conakry, adding: “We will go back and work on our mistakes as well as develop ourselves to ensure we secure the desired result in Conakry.”

Executing set-pieces or finishing has always been difficult for the Gambia team, he said, adding that for them to come within one year working and changing that situation would take time, he added.

He noted that they have lately been working a lot on finishing but the team couldn’t always win, he said.

It is a relief they did not concede against Guinea, he admitted, but said the performance of his starting eleven has always been “extraordinary” and they also understand the system they play more than the other players.

“As such it is not easy to break through the team,” he said, adding that they always maintain capable substitutes.

“Changes will come when the time comes but for now we are sticking to our starting eleven. We might make changes when we go to Guinea, you never know,” he added.

He described Musa Barrow as a quality player that can change games, adding that he would work out a plan to break into the starting eleven but always as technicians they bring in players when necessary.

He and his team treat games as they come, he said, adding that Guinea’s tricks before kickoff did not have any effects on his side during the game because they had been scared of The Gambia U-20 since they stepped into the country.

“The Guineans had chances but we created better chances than them,” he said as he thanked everyone for their support.

In his comments on the outcome of the match, Guinea Conakry head coach Mandjou Jallow said he was delighted collecting a point against The Gambia away.

The Guinean coach was also full of praises for the Gambia skipper Ablie Jallow.

He said his players “are hungry for victory at home and will try to play better at home in order to win”.

They are confident of winning at home to ensure they qualify for Zambia 2017, coach Jallow added. 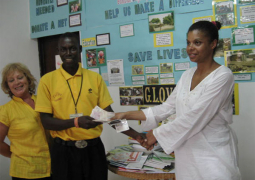