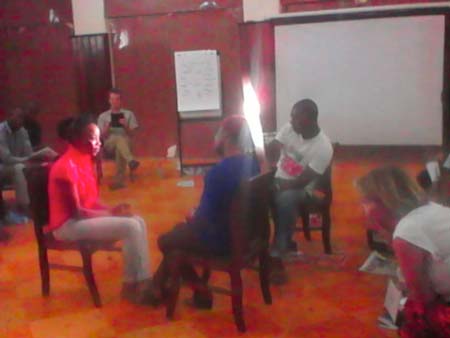 Female Genital Mutilation (FGM) has been more than a three decades’ campaign in The Gambia, and everyone has been a player in ending the practice

But those that are most effective in the fight against the age-old tradition were those that were cut; the survivors themselves.

Being a survivor, a media practitioner and a participant in the Safe Hands for Girls, Guardian Media end FGM Media Academy, is one good thing that can happen to survivors like me struggling to put an end to the practice.

At the opening session, speeches from every player in the End FGM Campaign were delivered, and expectations were drawn, ideas started flowing and experiences shared.

What is more interesting is the fact that every participant in the media academy is a survivor, and has an emotional story to tell. Recalling those moments when one was cut is the hardest part ever.

There is nothing more painful and hurtful than to see a baby cry, not because she is hungry, sleepy, but because she is being tortured with a sharp blade brutally, all in the name of culture.

Nothing is more heartbreaking than to see a mother standing, seeing her baby in the hands of an old woman who has partially lost her sight, perform such a brutal act on a child.

There have been debates over and over again on FGM, but have you seen the videos showing the real act - and what will be your reaction after seeing this video?

Survivors at the academy sitting on their stories were forced by their emotions to tell their stories, because it was right in front of them.

The secret chamber of FGM is no longer a secret issue, but a public issue that needs to be addressed.

I saw them, two women hold a month-old baby in their hands. One of them placed her on her laps and sitting on the ground, while another pull out a brand new knife, then took her hand to hold her tiny clitoris and ravaged it with the knife.

Her hands unshaken, her heart never stopped beating, her face had no drop of tears; a woman with no emotional feeling for a baby, and she never stopped until the job was done.

My eyes could not hold back tears, because it breaks my heart to see a baby crying for help; feeling helpless, she is alone in the hands of these hungry women whose thirst for blood is immeasurable.

Her mother probably very far away from her, her father off to work and the only ones there are other women and this stranger who used the blade on her.

Then this woman brings out a black powder, puts it on cotton and pastes it on a fresh wound; the baby’s cry increases the more, communicating to them to stop what they are doing to her, but to no avail.

The participants, some crying, some confused while others filled with anger begged for the film to be stopped. Then stories began to flow, and I was amazed because I never knew that the room was filled with survivors and brothers of survivors.

The first to speak said, while crying: “I was sealed, but I never knew until when I got married and was given away to my husband. We tried to have sex for three days; we could not, so I went back home to my mother and explained it to her.

“They said I was sealed, and they had to take me back to the circumciser to unseal me. She could not finish because her heart was heavy, and she was crying.”

Another participant, a man declared that he will never cut his children, and his children’s generation yet unborn.

At that moment, I remembered my own FGM ordeal; and then we all have a story to tell that is common to all of us.

Every activist, every FGM advocate has her own story, whether she is directly or indirectly involved.

This is what Aunty Amie Sillah has said: “My daughter got epilepsy through FGM.

“My daughter got epilepsy through Female Genital Mutilation, while undergoing the practice.”

She is a women’s rights and political activist and was ever present in the campaign to end FGM in The Gambia.

Amie Sillah was invited by Safe Hands for Girls as an inspirational speaker to the participants, at the end the FGM Media Academy which was ongoing at the Paradise Suites Hotel.

Knowing her and the work she does in terms of promoting and protecting the rights of women and girls, and her work as a journalist to bring forward the stories of the survivors, she indeed inspired the participants.

She said her daughter got scared during the process, and that was how she got epilepsy.

When a child gets sick or dies in the process, they say it is the witches and the witch is always the old woman or a widow in that community.

“I believe that men and women should stand firmly and end it,” she said, adding that people like herself are strong, and have said no to marginalisation and FGM.

She said the different media of communication such as the print, electronic etc., can also be used by journalists to spread the information.

“We have microphones we can use as journalists; we can use T-shirts, but we have to give it the human interest story,” she said.

“It is not only FGM that we have to fight against, but also other harmful traditional practices such as early marriage, inheritance, among others; to talk about them for the people to be aware.”

“I met a woman in the rural areas; she was an orphan and married. She lost her mother and father, and she was living with her co-wives and she is treated as a Cinderella in the house.

“She is married to an ‘Alhaji’ with two wives that are teenagers, but older than this girl. You know the polygamy system, the elder wife was kind to her, but the other wife was not.

“So when it is time for her turn to spend the night with her husband, the other wives will leave her with all the work and will not help her. “Meanwhile, her stepmother went on saying that she is a witch, and that she killed her mother and father.

“Due to the consequences of FGM, she had a stillbirth and also has fistula - and faeces and urine leaked out of her.”

“When her story was published and she got help through an operation, she got treated and her life was given back to her.

“We all have a story to tell, even you at home hiding what you are going through; come out, break the silence and let us speak with one voice and end FGM in a generation.

“Your story though unpleasant will lead to many dropping the knife.”

Previous:
AGIB on course to be among best three banks in Gambia
Next:
54 young people to undergo entrepreneurship training in CRR/URR