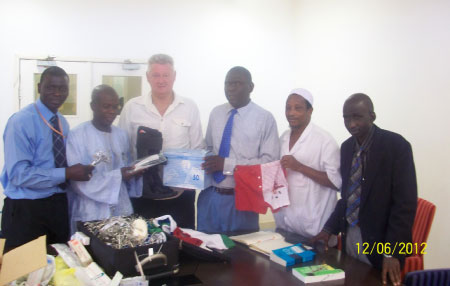 Serrekunda Major Hospital yesterday benefited from medical equipment through a donation presented at its grounds.

The gesture was backed by one Robert Bob Jones from Wales of the United Kingdom.

Speaking at the ceremony, Musa Mendy of the Ministry of Basic and Secondary Education revealed that similar donations had been made some time ago to other places such as at the AFPRC Hospital in Farafenni and RVTH among others.

He, however, thanked, Muse Ceesay of Africell for his remarkable contribution in ensuring a remarkable occasion.

Mr Mendy showed his appreciation to the gesture and revealed that the equipment would go a long way in easing their problems at the hospital. He, however, pointed out that Bob is a pal of him, that he has been coming to the country over the years with the aim of working towards helping the country in various ways.

Mr Mendy said they are currently building a school at Lamin Daranka village for the community.

The donor Robert Bob  expressed his optimism of the equipment being put into good use, revealing that it was a great pleasure for him to make the donation and that he hoped his small contribution would obviously proved to the hospital and to the patients.

The Principal Nursing officer, Momodou Jallow, thanked the donor for the gesture and promised that the equipment will be put into good use.