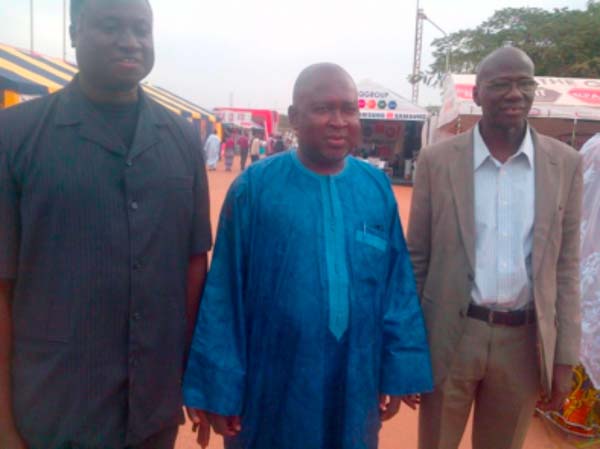 Deputy Minister Bojang said he was very impressed by what he saw at this year’s GCCI-organised trade fair.He hailed the GCCI for involving local farmers to enable them showcase their horticultural products.

Bojang was speaking on Monday during his visit to the small-scale farmers stalls at the fair.The participation of the farmers was sponsored by the agricultural projects.

The Nema project and GCAV project under the Ministry of Agriculture are currently sponsoring 12 stalls for small-scale farmers at the trade fair organised by GCCI.

The purpose of their visit was for them to talk to the sponsored small scale farmers, share ideas and experiences about the trade fair, their successes, concerns, challenges, and their impressions of this year’s trade fair, as well as about the marketing of their products.

Speaking at the site, Deputy Minister Bojang said: “I am really impressed with what I have seen and my interaction with the some of the farmers, because if farmers are saying that they want this kind of trade fair to be a yearly event, then that shows the trade fair is well organised and meaningful to them.”

Most of farmers narrated some of their difficulties in selling their produce, and creating this type of trade fair means creating an avenue for the private-public partnership, he continued.

Deputy minister Bojang also stated that since most of the small-scale farmers are being sponsored by the agricultural projects, it was deemed necessary for him to visit them at the trade fair to see their products and chat with them on improving their livelihood.

“I believed farmers would be very appreciative of my visit as we work hand in glove, to know their concerns, constraints, challenges and chart the way forward in improving their agricultural production and productivity.”

On some of the difficulties the farmers want redressed by the ministry of agriculture, Bojang said the ministry is working to ensure that the horticulture unit works towards addressing those concerns, especially those coming from Serrekunda, who lamented the need to fence their gardens and water problems, among other concerns.

Farmers also expressed their appreciation and commended the NEMA and GCAV projects through the ministry of Agriculture for sponsoring them, which they said is geared towards improving their livelihood.

Some said their participation at the trade fair yielded big dividends in their businesses within a short period of time, and called for a continuation of this kind of trade fair, and thanked GCCI for the initiative.

The GCCI representative, Beatrice A. Mboge, who doubles as the director of corporate services, returned gratitude to the ministry of Agriculture through the deputy minister of Agriculture for the partnership in sponsoring 12 stalls at the trade fair.

She urged others to emulate the ministry of Agriculture as it is all geared towards nation-building.