More than two years following the entry to the German Bundestag (Parliament) by Charles Mohamed Huber and Karamba Diaby, both with ‘family roots and ties’ in Senegal, both Gambians and Senegalese are extremely enthusiastic and excited to identify and support other candidates within their community for future elections.

Clearly elucidating to The Point the ‘‘desire to identify another Charles and Karamba across the country’’, Ibrahim Cisse, a Germany national of Senegalese roots, emphasised the ‘‘importance and urgency’’ of a search.

Cisse, one of those exploring the possibility of recognising and identifying such candidate, noted that Senegambians and other Africans in the country are ‘‘extremely enthusiastic and tremendously eager’’ to see another Member of Parliament coming from our ‘‘our own community’’.

He added: ‘‘We should not allow others to lead the search for us... Instead we should be in the front in a similar manner just like how other people are doing it for themselves; allowing outsiders to do it for us may not be in our best interest.’’

Some of the Senegambians who spoke to The Point during the campaigning and subsequent election of both men to the Bundestag, argued that even though more needed to be done to ‘‘break the ice further’’, the identification must include politicians from various political parties.

Even though Karamba’s campaigning was ‘‘extraordinary and incomparable’’ by merely using his locally made bicycle crisscrossing his constituency, others maintain that ‘‘sponsors are vital’’ in winning elections.

Aissatou Ndiaye, well-known supporter of Karamba, contested that ‘‘everyone is aware that candidates need to be sponsored and a lot of money is always involved from start to end. Therefore, we must let others with cash and influence come in and support us’’.

She added that ‘‘everyone should be involved...People are now excited and some are even now calling them Obama’’.

Interestingly, both men were elected for rival ‘‘left and right’’ political parties to the Bundestag.

Charles, who is now 57, a son of a Senegalese diplomat with a German mother, is reportedly doing well at the Bundestag.

Prior to his election, he was already known to the German public as he is a popular television actor, and has featured on German TV for many years.

He is a member of the centre-right Christian Democrat Union (CDU) party, which won the recent elections in Germany.

Karamba is 52, and in contrast was born in Senegal and after obtaining a scholarship; he moved to East Germany in 1985 and later became a chemist.

He is representing the Social Democratic Party (SDP). He is equally performing ‘‘exceptionally’’ well.

Karamba, who always talk about life and friends back home in Senegal, once said he is a ‘‘product of equal opportunities and was given the chance to study as an orphan... and wants to make a difference’’.

Charles, for his part, said his ‘‘work for Africa’’ meant so much to him as he had already set up an organization called ‘‘AfrikaDirekt’’ which supports children from poor backgrounds.

As both men perform their duties in the Bundestag, Senegambians and their supporters continue to hunt for new candidates. 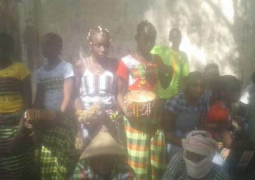