Speaking to journalists at the end of the ten-day meeting, the leader of the RP party, Sering Alhaji Mamour Ibrahim Niass, said the aim of the meeting was to bring militants together from all the regions in Senegal, to discuss on the way forward and some of the challenges that need to be addressed before the 2012 Presidential elections, and to be better prepare for the task ahead.

Sering Mamour stated that the first congress of the party was held in Rabat Morocco in 2007, noting that the reason why they normally organise their congress in the African countries is to promote Pan-Africanism and integration among African countries.

He has described the Banjul meeting as successful as, according to him, his party militants had come up with very good resolutions that will move the party forward.

He assured his party militants that all the resolutions that had been agreed on will be accordingly implemented before the Presidential elections. He also promised to support the party with 80million CFA to facilitate the smooth running of the party.

According to him, seven vehicles will be donated to the party this week, noting that a micro-credit scheme that will assist militants would soon be established in all the regions.

It could be recalled that the RP party was formed on 29th  March, 2003, in Jurbel, Senegal.

Sering Mamour Ibrahim Niass started his political career in Cairo while he was a student. He was also a member of the Youth Movement of the Socialist Party in Senegal, but after a sojourn in 2000 he decided to join Progress Alliance Forces of Mustapha Niass. After sometimes he broke away with Mustapha Niasse and formed his own party.

Sering Momour Niasse is presently the Vice-President of the Senate of Senegal. 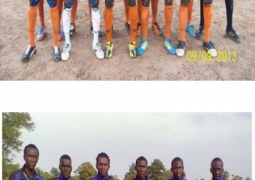 S/Biko to quarrel with Sunderland in Gunjur League final