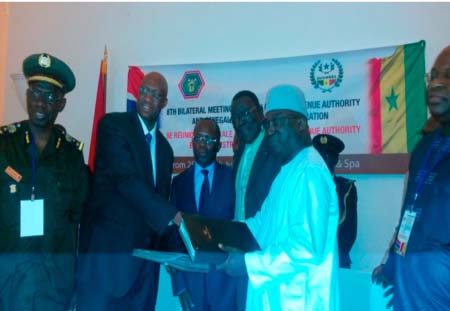 The Gambia Revenue Authority (GRA) and Senegalese Customs Administration Wednesday signed a Memorandum of Understanding comprising 17 chapters and 41 articles, all geared towards addressing key issues on understanding the administrative and facilitation of trade.

The MoU was signed by the two heads of the national customs administrations - Yankuba Darboe and Papa Ousman Gueye of Senegal - at the end of the three-day bilateral meeting held in Banjul.

The signing of the MoU was witnessed by members of their senior management, and the Senegalese ambassador Prof Saliou Ndiaye and Ambassador Paul Badjie of Senegalo-Gambian permanent secretariat.

In his closing remarks, GRA Commissioner General Yankuba Darboe said the three-day forum had been very interactive, with the exchange of information geared towards not only improving relations between the two administrations, but also accelerating trade, among others.

“I am confident that we will now graduate to the level of implementation and share the gains together,” Mr Darboe declared.

The forum witnessed sincere and frank discussions, which was highly mutually beneficial to their work with the hope of improving understanding between the two administrations, he added.

“I would like to encourage all of us to work together to deepen the gains already made, and continue to share the great news and work together with other relevant stakeholders, such as traders and drivers, towards implementing the agreement by establishing a joint customs post, information on transit among other things on our bilateral relations; then the MoU could be seen as a success,” he told participants.

“We promise to work towards implementing the MoU and other agreements that are aimed at bringing free trade and economic improvement for our people,” Mr Darboe assured them.

He thanked the Gambia government through the Ministry of Finance and Economic Affairs for all the support given in the course of the three-day bilateral meeting.

The Director General of the Senegalese Customs Administration, Papa Ousman Gueye, said the importance of the document could not be overemphasized, and that it needs to be respected and implemented as agreed by the two administrations.

He said the document had justified the confidence the two administrations have in each other, adding that the document could be described as high quality and could be used as working tool for both states to avoid misunderstandings.

According to him, the two customs administrations should be proud to show the document to their colleagues in the region, as it is a unique document.

“We want to establish true cooperation between the two customs administrations, and this is one way of establishing such cooperation by creating a MoU that will serve as a guiding document for both sides,” he said.

Gueye commended President Yahya Jammeh and the Gambian people for hosting the meeting in Banjul. He also thanked GRA Commissioner General and his management staff for their hospitality. 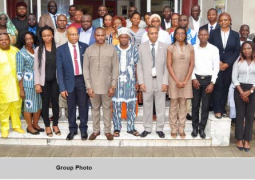