National Patriotic Students Union (NAPSA) suffered a narrow 2-1 win over the combined forces of the service departments in a friendly game, geared towards fostering positive relationship among the students and servicemen.

Goals from Major Musa Savage and Superintendent Andrew Gomez, gave the servicemen a hard fought 2-1 victory against NAPSA side, who could only manage a consolation, courtesy of a magnificent second half strike from Sarja Sanneh.

A hard fought and exciting encounter which was characterised by some brilliant exhibition of individual skills and experience saw both sides created numerous scoring opportunities only to be squandered away, owing to poor finishing.

An entertaining friendly match which was held at the Independence Stadium in Bakau on Monday, under the watchful eyes of the Minister of Youth and Sports, Sheriff Gomez, the interim chairman of the National Sports Council, Mustapha Alex Dacosta and the honourable Speaker of the National Assembly, Elizabeth Renner, according to the Head Coach of NAPSA, Sulayman Jallow is aimed at strengthening the cordial relationship that exists between the students and the security forces in the country.

The role of NAPSA in society as patriotic students' Mr Jallow added, is to join hands with others in an effort to move the country forward, which he said, the security forces are no exception.

Another reason of organising this friendly game, Sulayman noted, is to fulfil their roles as partners in national development, which he believed, has also been achieved.

The match was graced by the Speaker of the National Assembly, and is expected to be transformed into an annual event. 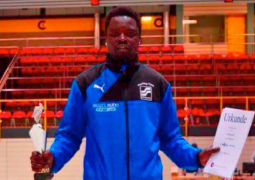