He said "schools should form athletic clubs so that the athletes will continue training for the whole year, but not only to participate in competition for the sake of winning or cheap popularity in the game of sports."

"Schools should keep athletics moving forward not backward for the benefit of the country.

Gomez also urged the athletes not to undermine each other, adding that they should see each other as students.

"The athletes should help one another for the benefit of the country to raise its image," he stated.

He further revealed that he will be the first to form this athletic club in his school, St. Augustines, noting that forming a club always requires money.

Gomez also expressed his committee's plans to make this year's inter-school athletic competition the best in the country.

He commended the schools that took part in the just ended Gambia Secondary Schools Sports Association for Greater Banjul. 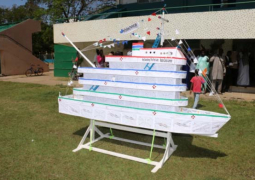