Players of Gambia’s senior national team; Scorpions have called on Gambian fans to come out in their thousands to show support to the team as they take on the Democratic Republic of Congo in their second fixtures of the Africa Cup of Nations qualifiers at the Independence stadium, this evening.

The national team players made this plea to the fans during an interview at the Airport shortly after their arrival from Luanda, Angola.

They defeated Angola 3-1 away (Luanda) in their first Afcon qualifiers group D encounter to end the long awaited away win in a competitive tournament for over three decades.

Skipper, Omar Colley said it is always a good feeling to win in an away game and come back home, noting that though everyone was tired but still expressed hope to prepare more for today’s encounter against DR Congo

Talking about today’s encounter, the Sampdoria defender said “we all know how the difficult group we are in and of course winning our first game away is a good start and also very important for the team and the country”

According to him, they need the support of the fans as usual, saying that without them, they’re nothing. He added that if they collected six points in two games means that they are 40% of being in the Africa Cup of Nations tournament proper.

For his part, Bubacarr Sanneh, alias Timber also expressed delights for collecting their first-ever away win for over three decades in a competitive match, noting that they try to compose themselves maturely to come from 1-0 down to win 3-1 in their first Afcon qualifiers game. “We have come back home to prepare more against Congo today because it is a two different game. Though Congo has a very good team but we can still upset them in Banjul,” said the Göztepe defender.

Ebrima Sohna said it’s a very good start for them to take the first three points away, noting that all of them as players were so confident in this encounter looking at the caliber of players the Gambia has now.

“I’ve been in the national team for so long and honestly with this kind of players, I feel we can win any team,” he said, adding that even though they won their first game, they shouldn’t feel so big and proud of today’s encounter.

Sohna, who is one of the oldest players in the team also joined others in calling on all fans to come and support the team, while also calling on the fans to be patient, expressing believed that they can make it to the next Afcon tournament.

Assan Ceesay said that the first thing they did was to believe in themselves that they can do it, which he said was the reason why they came from behind to win their very important away match in this tournament.

When asked about how important his brace was during the encounter, the FC Zurich striker said, it is all due to good motivations, noting that winning a team like Angola who was in the Afcon tournament means that it’s a big boost for the team.

Bubacarr “Steve” Trawally said that they are happy to have showed themselves playing good football in Luanda, and most importantly to top the group D after first game

“We can still and continue making the Gambian fans happy because the quality is in the team but still again we will not be over joy only by winning the first game. We will prepare more for the subsequent games especially today against DR. Congo.

According to UAE Ajman striker, they are in one of the toughest group in which they were terms as underdogs but now winning the first game, all teams will come preparing more. He also called on fans to come to the stadium not as spectators but to come and show real support to the team.

Coach Tom Saintfiet said this is a victory for the country, the boys and the fans at large, adding that everybody especially the GFF did everything that was necessary to get the good result.

According to the Belgian Coach, though it is going to be a very difficult task for them but winning their first game is a good start which no take can ever take it away from them.

He finally called on the fans to come all out to support the Scorpions as they are aiming to book their first-ever Afcon berth tournament. 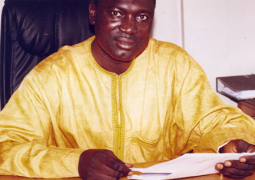