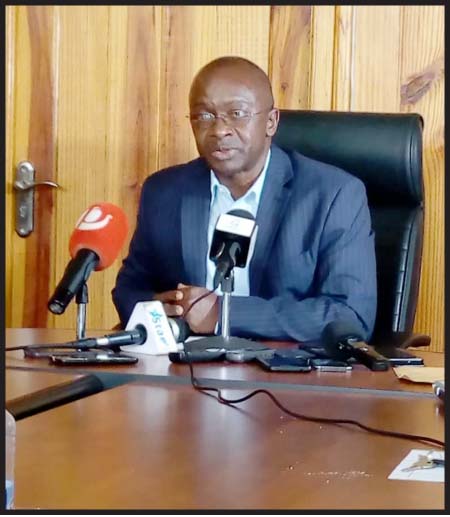 Justice Cherno Sulayman Jallow, the chairman of the Constitution Review Commission (CRC) has announced that the Commission will release the draft of the new constitution today.

“We’re at a stage where we are now completing the drafting of the first constitution following the review processes.  Therefore, it’s my pleasure to let all of you know that now; having drafted the new draft of the constitution, we are in a position to publish the first draft tomorrow.”

The CRC boss was speaking yesterday during a day-long training for journalists at its office. “The media plays a significance role towards the drafting of the new constitution in terms of informing the general public of what CRC is doing. The 11 commissioners of the CRC cannot do it alone without the involvement of the media.”

“We will share the draft online and we will also have had copies tomorrow. It is important for everybody to know particularly to yourselves, that that this is just the first draft and that it’s a consultation draft in order to sensitising Gambian in terms of what we have been doing and also to invite the public to provide comments on the draft to indicate to us in a very constructive ways; whether we would be able to meet the aspirations of Gambians people,” he told journalists.

He said with the help of brilliant researchers, they were able to look at the constitutions of a quite number of countries globally. “We are at a stage of developing a constitution that Gambians can look at and express opinions before the final draft.”

As citizen, he explained, we should establish whether the draft actually outline or capture the necessary elements for the future governance of this country and whether it’s in the best interest of our people and future generations of Gambians.

“If there are views that we should improve those are things that we will certainly welcome and what we expect is for people to read the draft constitution and understand it rather than to misunderstand it. I think that is important. We hope that the media which are partners will emphasise that to our citizens and other stakeholders; so that once the draft is published, it would be the subject of constructive analysis from members of the public.”