Erasto Nyoni’s 84th minute penalty was enough to earn a 2-1 win over The Gambia in the World Cup qualifier on Sunday.

Despite and MSK Zilina striker Momodou Ceesay’s 7th minute strike which gave The Gambia an early lead in , the Scorpions failed to guide their early lead and conceded two second-half goals to remain rooted at the bottom of the group with a single point.

completed a remarkable turnaround in the 84th minute when Erasto scored a penalty after a Gambian player held the ball in the penalty box to end the visitors’ hunt for maximum three points away from .

By this result in relation to Saturday’s between and , have leapfrogged both The Gambia and and sat second in Group C behind .

The Scorpions drew their first group fixture against but could have joined section leaders on four points had they won over on Sunday.

The Scorpions will now proceed to to take on their North African opponents in the 2013 African Cup of Nations qualifier on June 15, 2012. 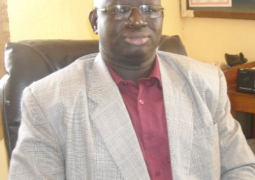