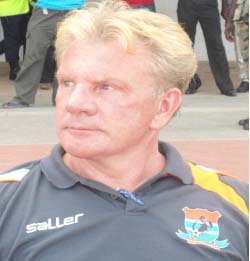 Paul Put, head coach of The Gambia senior national team, has said the Scorpions’ victory against the Democratic Republic of Congo has absolutely raised the confidence of his team as he remains hopeful of achieving the desired result ahead of their trip to for the African Nations Cup qualifiers early next month.

The Belgian tactician emphatically guided his Scorpions side to a heroic 3-nil thumping over visitor DR Congo in Wednesday’s international friendly match at the Independence Stadium much to the satisfaction of a massive number of Gambian fans who turned out to watch their foreign-based players blended with few home-based stars in action.

“The win is important for our preparation, and mentally it has boosted the confidence of the players ahead of our trip to ,” said Paul Put, who was speaking to journalists at a press conference organised shortly after the match on Wednesday.

He added: “We missed several key players, which hampered our preparation for this match but it was also good to test some new players. I want to congratulate all the players for showing their willingness and it was a good game.”

Scorpions’ team captain Mustapha Jarjue also added his voice to the interview, saying: “I feel happy for my players and the fans for their support despite the Ramadan.”

The confident Jarjue, who recently switched allegiance to Vancouver Whitecaps in the Major League Soccer from the Belgian club for a reported four-year deal, said: “We are confident that we will be the first Gambian team to qualify for the African Nations Cup finals.”

One man who is equally optimistic about Gambia’s qualification to their first-ever Nations Cup finals is no other person than Seedy M.B. Kinteh, president of the Gambia Football Association, who told reporters that a formidable team would be put in place ahead of the trip to Namibia.

“The test game is important because we are going to play in Namibia in three weeks’ time in the qualifiers but what was also important was the performance of the boys and hopefully we can beat Namibia and Burkina Faso and qualify for Gabon and Equatorial Guinea,” said the confident GFA supremo.

The Scorpions, who currently occupy second place in a three nations qualifier group on 3 points, six behind group leaders , will travel to at the weekend of 2th, 3rd and 4th September for the qualifier game in .

They will also host later in October for the decisive match.