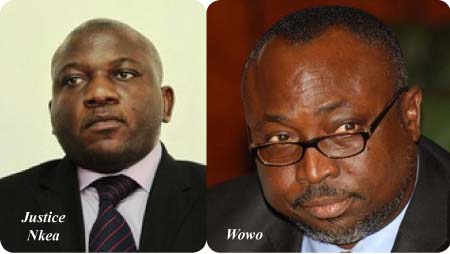 Justice Emmanuel Nkea of the Special Criminal Court yesterday rejected the motion filed by former Chief Justice Joseph Wowo, for him (Nkea) to excuse himself from presiding over the case.

Joseph Wowo earlier filed motions for Justice Nkea to excuse himself from the case, because there was likelihood that the court would be bias.

In the motions, his defence counsel, Uzuma, told the court that in view of the court’s earlier ruling allowing PW5, John Belford, the Judiciary Secretary, to be recalled to give further evidence, they had filed a notice of grounds of appeal for a stay of proceedings.

He added that he had received an instruction from his client that he was no longer comfortable with the court hearing the matter, because he feels there was likelihood that the court would be biased toward the matter, and urged the judge to excuse itself from the case.

“I see the objection as a dilatory attempt to stall these proceedings and divert attention from the issues on trial. It is for these that I overrule the objection as lacking in merit. I shall order for the hearing in this matter to continue forthwith,” Justice Nkea told the court yesterday.

In his ruling, Justice Nkea stated, among other things, that “on 19 September 2013, Mr U. Achigbue, the counsel for the 1st accused, Joseph Wowo, orally applied to the court on the instruction of his client, urging him to excuse himself from further proceeding in the matter.

“Counsel was directed by the court to file an affidavit setting out the grounds of appeal in support of that application and notice of motion was filed with a-17 paragraph affidavit in support sworn to by the 1st accused and the counsel moved the motion the same day,” he added.

The judge went further to state that “the summary of facts in support of the allegation of a likelihood of bias as set out in the affidavit are that:Justice wowo served as acting and substantive Chief Justice of the Gambia he issued instruction to the trial judge and in some occasions the trial judge questioned them.

“He stood his grounds and the trial judge was hostile and openly showed discomfort to him in his chambers,” he said, adding that “Justice Wowo averred that he was aware of the petition written against the trial judge on some cases and for which he expressed certain adverse views, much to the court’s chagrin”.

He deposed further that the court was reluctant to and took his lawyers insistence for the court to record a piece of evidence favorable to him when Alieu Barry testified on 18 September 2013, he stated.

He averred further that even when the court asked the other accused persons in another case whether they are comfortable with him proceeding with their case, the court failed to give him the same opportunity.

“ That the court sometimes reshape questions for prosecution witnesses much to his detriment, especially when the prosecution was led by state counsel legenju Vitalise, a nephew to the trial judge, and that the objection by his counsel to the recall by the prosecution of PW5, to give further evidence was overruled without hearing on the merit.

“That the court made certain utterances towards his counsel, which made him uncomfortable and almost withdrew from the case.

“It is for the above reasons that he wants the trial judge to excuse himself from this case,” Justice said, adding that to these allegations the state did not filed any affidavit in opposition because according to the prosecuting counsel, Mr Agiah, these were allegations directed personally against the trial judge.

The judge further adduced that where evidence whether viva voce or in an affidavit remains unchallenged and uncontroverted, the court has no choice than to regard it as establishing the facts alleged therein, but it must be emphasize that, these rules of law like all other rules of law have their known exception, and to these rules, there are plethora of cases stating that such evidence must in itself be cogent and strong enough to sustain that fact alleged.

“I am therefore not bound to take the contents of the unchallenged affidavit of the 1st accused /applicant as establishing the facts alleged therein. I will not do so for reasons that would be apparent from the body of the ruling,” stated the judge.

“I have read through the length and breadth of all existing volume of The Gambia Law Reports, and I found two cases to be adequately instructive on this issue, and from through judicial examination of these cases, it seems to me that the allegation of judicial bias can be grouped into two categories, those relative to the pre-trail phase and those relative to the trial phase,” he said.

On the allegation of hostility, animosity and adverse comments on the petition written against the trial Judge

Justice Nkea noted that the allegations of hostility and animosity are issues which allegedly occurred long before the 1st accused/applicant was charged to court, talk less of being made to appear before him.

In January 2013, he went on, the 1st accused was charged before the Banjul Magistrates’ Court, and his worship Dawda Jallow, exercise his discretion the other way by declining to admit him to bail, and he was placed on remand by the trial magistrate.

“In August 2013, the 1st accused/applicant was again charged before the Banjul Magistrates’ Court and his worship Lamin Mbye exercise his discretion the other way by refusing to admit him to bail and remanded him to the prison custody,” he added.

The 1st accused/applicant again filed an application before this court, seeking its discretion for the grant of bail and even as that application was strongly opposed by the state, the court still exercise its discretion favorably and admitted him to bail and at that time also there was no likelihood of bias and this court was not biased.

He said in August 2013, when the 1st accused was formally arraigned before this court, he was again admitted to bail on fresh and less stringent terms, at that time also this court was not biased and suffice to state that if for any reason this court had exercised its discretion against the grant of bail and considering that the superior court were all on vacation, the 1st accused /applicant would have remained in prison custody till October when the superior court resume.

It could be seen that throughout the pre-trial phase and even at the commencement of this trial, the 1st accused /applicant stayed mute, he said.

He never raise the issue of bias, and the question then was if all these allegation by the 1st accused are true or if they did create in the mind of the 1st accused or other reasonable persons in the society, the sense of a likelihood of bias to raise them.

“It is a hollowed principle of law well established under the common law that objection to a judge presiding over a case is then taken before hearing commences and not after. However, if it becomes necessary to take such objection in the course of the trial or when the trial is already concluded, then it is required of the applicant to demonstrate the area of the proceedings or decision that is beclouded by bias,” he added.

“Having not raised the allegation of hostility and animosity at the earliest opportunity or at the commencement of these proceedings, it seems to me the allegations are mere conjecture. I discard them as baseless and frivolous,” Justice said.

On failure to invite consent on trial

Justice Nkea stated that a court would not normally ask an accused whether he was comfortable to stand trial before it; this was an exceptional measure taken in exceptional cases.

On the recall of PW5 without hearing on the merit

He said during the trail, the prosecution filed a notice pursuant to the CPC of the Gambia to recall PW5, the judicial secretary, and in the process, the prosecution gave notice of their intention to tender certain pieces of documentary evidence touching on the respective appointment of Raymond Sock JSC and Agemang JCA (as she then was) as acting-Chief Justice of the Gambia, and counsel for the 1st accused objected to the recall of PW5, and extensively argued the objection orally.

The learned prosecuting counsel, MB Agiah, eloquently responded to the objection referring the court to criminal procedure in Nigeria.

The CPC of The Gambia gives the court a wider power to recall any witness at anytime of the trial, if it appears to the court that the evidence of that witness was essential to the just decision of the case, he added.

On assistance to prosecution and utterance of the court

The 1st accused /applicant failed to state the words or the utterance he alleged were made by the court that almost caused his counsel to withdraw from the case or how and what questions the court had reshaped for the prosecution, he said.

In this case, he added, the 1st accused/ applicant had failed to disclose the exact words utterances complained of for all to know whether they were disparaging or not or whether they presented fears of any likelihood of bias.

He equally failed to precisely state which question the court has reshaped for the prosecution and how such question were reshaped, he stated.

However, where a party raises objection as to the likelihood of bias, it was generally safer and for more in the interest of justice for the judge to give the benefit of doubt to his accusers and excusehimself from the case unless it was clear from the surrounding facts that the accused was only trying to delay the case.

“I see the objection as a dilatory attempt to stall these proceedings and divert attention from the issues on trial. It is for these reasons that I overrule the objection as lacking in merit. I shall order for the hearing in this matter to continue forthwith,” he declared.