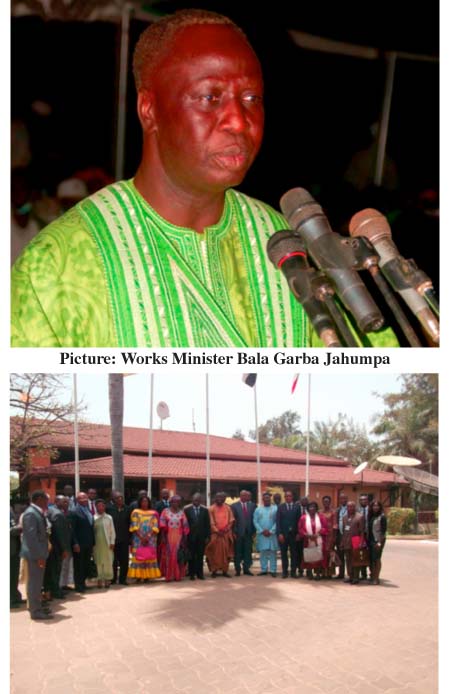 The ministers for Roads Infrastructure, Works and Justice from Senegal, The Gambia, Guinea-Bissau, Guinea, Sierra Leone and Cote D’Ivoire yesterday held a ministerial meeting on the Dakar-Abidjan Highway development project.

During the meeting, ECOWAS officials from different countries highlighted some of the challenges and remedies to them, which their various countries are facing regarding roads reconstruction and rehabilitation.

Speaking at the meeting held at the Kairaba Beach Hotel, The Gambia’s Minister of Transport, Works, Infrastructure and National Assembly Matters, Hon. Bala Garba Jahumpa, said the African Union and development partners had been working “tirelessly” on the Trans-African Highway Network (TAH), a network of all-weather roads of good quality, to provide direct links between capital cities of the African continent.

The highway project, he noted, would contribute to the political, economic and social integration and cohesion of Africa, and ensure that road transport facilities between important areas of production and consumption in this highway corridor adequately address the concerns of people of the sub-region.

According to him, the meeting of ministers from the Transport, Works, Infrastructure and Justice sectors of the member states, as well as development partners, is expected to provide a road map for the realisation of the project.

He disclosed that the TAH 7 - the Dakar-Lagos corridor - is expected to be developed to link TAH number 8, which stretches from Lagos through Yaoundé, Bangui, Kampala and Nairobi to end at the Port City of Mombasa in Kenya.

“This is expected to facilitate the free movement of people and trade along the corridor, thereby strengthening the economic, political and social cohesion among the countries and between the three regions traversed (ECOWAS, ECCAS, CEMAC and EAC).”

He further explained that the Dakar-Abidjan corridor, being the other half of the TAH No. 7, possesses similar levels of economic importance as the Abidjan-Lagos corridor and has the potential of improving the viability of the entire Dakar to Lagos corridor.

“In addition to the very important economic and political capitals that the corridor traverses, the area of influence of the Dakar-Abidjan corridor covers key production centres, natural resource enclaves, vibrant coasts and large arable agricultural zones.”

The potential of the corridor to contribute to the regional integration agenda of ECOWAS cannot, therefore, be understated, he said.

“We are expected to produce a memorandum that will be presented to the presidents of the Dakar-Abidjan corridor countries during the next ECOWAS summit that is expected in July 2016.”

Minister Jahumpa also said that in February 2013, the presidents of Nigeria, Ghana, Cote d’Ivoire, Togo and Benin agreed on the margins of the 42nd ordinary session of the authority of heads of state and government of the ECOWAS, in Yamoussoukro, Cote d’Ivoire, to work towards the construction of a homogenous 6-Lane dual carriage from Lagos to Abidjan.

He said that since this agreement by the presidents, the project treaty had been successfully signed and preparatory work had been advanced for the feasibility and detailed design, resource mobilization, as well as the sourcing of advisory services.

According to the Gambian Minister of Works, the region is now faced with providing a working document based on the recommendations adopted by their leaders.

“It was imperative to continue to remind themselves that projects like these would serve as a catalyst towards the social and economic development of our sub-region.”

He said if it is successfully implemented, the project would “pave the way to our economic prosperity which is long overdue bearing in mind the abundant natural and human resources within our region”, Minister Jahumpa said.

Regional works ministers, authorities and experts must see themselves as front runners to unlock the full potentials of the region and take pride in the execution of the assignment for their leaders, knowing fully well that their names would be written in gold if they achieve this giant leap in the socio-economic development of the West African region, Jahumpa added.