As part of its corporate social responsibilities, Standard Chartered Bank (), one of the leading banks in the country yesterday handed over the newly relocated and renovated Intensive Care Unit of the Royal Victoria Teaching Hospital to the hospital management at a ceremony held at the hospital.

The development, which follows a partnership between the two institutions way back in 2004 is done to the tune of D600, 000 thus demonstrating the bank's commitment and determination to contributing not only in the country's health sector but other sectors as well.

Speaking at the handing over ceremony, Mr. Momodou B Senghore, Chairman Board of Directors, Standard Chartered Bank () said his bank believes in long-term partnerships and making long term commitment that over ride short term challenges.

"Partnership for us, is the continuation of our long and successful history here-continuing to remain an integral part of the local economy. Continuing to support local and international Businesses drive economic growth", he said.

He pointed out that Standard Chartered Bank has partnership with all the stakeholders in the country including the government, and that they will continue to use their international expertise and capabilities to introduce new innovative products and services into the market.

"We launched our partnership with the RVTH back in 2004 by constructing a D4Million extension of the Paediatric ward which has indeed contributed to the reduction of child mortality in the ", he noted.  In addition to our other contributions in the health sector, he went on, the bank in 2008 pledged to sponsor the ICU.

Also speaking the at presentation ceremony, Alhagie Babucarr Ngum, the Public Relations Officer at the Royal Victoria Teaching Hospital commended the Standard Chartered Bank for what he described as a timely gesture. "The gesture is very timely as it comes at a time when the ICU really needs to change its location and renovation.

Mr. Ngum noted that RVTH has been in partnership with standard Chartered Bank over the past years. "This is not the first time the Standard chartered Bank is sponsoring Wards at RVTH. The bank has been helping the hospital. They are very helpful and we will continue our partnership", he said. 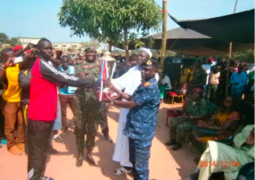