With a few more matches to go down to the wire in the Belgian Pro League, Ebrahima Ibou Sawaneh’s OH Leuven has failed to join the top four teams of the league contenders, this season.

The Gambia international, who is contending for the league top scorer, has failed to score since December 22 when his side drew 2-2 against Lierse leaving him with a record of 16 goals in 22 matches, soccerway has revealed.

Having been traded from Mon to his present club last season, Sawaneh is still second on the group of contending goal scorers in the league with his closest rival, Bacca of Club Brugge also clinging ahead with a single point separating them.

OH Leuven, which is 10th on the Pro-League table with 28 points, are set to play Sporting Charleroi on Saturday in week twenty-five. 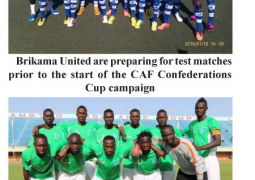