Banjul United are currently leading the contest for automatic promotion to the country’s top flight football next season after their 1-0 win over Red Hawks in the all-Banjul derby played at the Banjul KG5 Mini Stadium at the weekend.

Fortune FC were leading the race prior to their 2-0 defeat to Serrekunda East Bi, who are currently fighting for survival in the second tier.

Elsewhere, Wallidan played out a goalless draw with BK Milan at the Independence Stadium in Bakau on the same day. 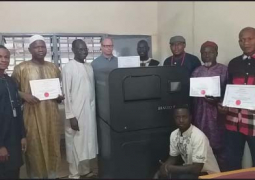