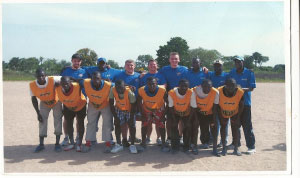 A weeklong training on rugby is currently underway in Gunjur Village, Kombo South District, in the West Coast Region.

The training, organised by Warrington Wolves Rugby Club in the United Kingdom, brought together players from Gunjur Upper Basic School and the village to promote and develop the game in Gunjur.

In an interview with Pointsport, Andrea Thomason, a member of Warrington Wolves Rugby Club, said the aim and objective of the training was to develop players and coaches in basic skills in Rugby, adding that they are currently leading the table.

Thomason stated that he is really glad with the performance of players during the training, saying their “performance is absolutely spectacular”.

He expressed their readiness to support Gunjur Youth and Sports Development in their quest to develop the game to higher heights.

Tyron McCarthy, a player of Warrington Wolves Rugby Club, said the club was formed hundred years ago and have won series of silver wears, adding that the club has also won competitions on several occasions.

McCarthy said he was pleased by the performance of the players, adding that they “will try by all means to support and develop the game in Gunjur”. 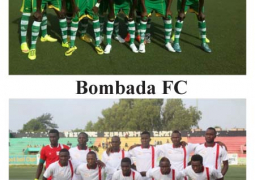