Alieu Bah, a youth, was recently arraigned at the Brikama Magistrates' Court for violently robbing one Ala Baraka in Gunjur.

The particulars of the offence read that Alieu on or about 18 October 2007, violently robbed Ala Baraka of his mobile phone and D6000.

The mobile phone was valued at D2500.

When the charge sheet was read to Alieu, he admitted responsibility for taking the phone but not the money.

Meanwhile, Alieu was remanded in custody as his cases continue. 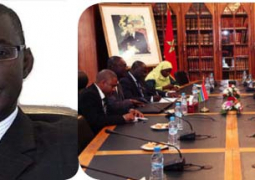