Following the untimely demise of Amadou Sowe last Friday in where he was undergoing medical treatment, Heath Matters yesterday sound the opinion of people who have work with him.

Sana Sambou, the president of the Gambia Association of Public Health officers described the untimely demise of Amadou as a great lost to the nation and the entire health sector. He noted that the late Sowe was a prominent public health officer who contributed immensely towards the so-economic development of the nation. "The health sector will greatly missed him," he said.

He said Amadou was very key in dissemination of health information to the public and as a result, he was described as the mouthpiece of the Ministry of Health.

Doctor Omar Sey, Deputy Permanent Secretary, Ministry of Health and Social Welfare said the late Amadou was hard working and dedicated to duty. "He was very instrumental in implementing National activities. He died in active service and may his soul rest in perfect peace," he said, adding that he dedicated all his life working for the betterment of the health sector.

Abdoulie Cham, Community Relation Officer at the Medical Research Council described the untimely death of Amadou as a lost to the nation. "He was a great asset to the nation. We have work closely with him especially in our community sensitization programmes. He was a good collaborator to MRC, May his soul rest in perfect peace," he added.

Honourable Mam Chernor Jallow, Member for described the late Amadou Sowe as a true friend and man of the people. He described his death as a big blow to the nation, noting that the Ministry of Health and Social Welfare has lost a great asset as far as their communication unit is concern.

Madi Ceesay, the Managing Editor of Daily News and former President of the Gambia Association of Health Journalists said "I know Amadou since 2001 and he was very instrucmental towards the development of the Association. We have worked closely with him to make sure that people are aware of health issues in the country," he said.

He was also very supportive towards Media Agenda health programmes in which over hundred media personnel's were trained. "May Allah the Almighty reward him, May his soul rest in perfect peace," Ceesay added.

Assan Bah and Maimuna Sowe both Radio presenters with Kids With Talent radio said the late Amadou was the one who inititated the health program at KWT two years ago called 'Your health is Your Wealth'. "Since then, the radio has been running the program. He used to conduct very educative health program and for sure the Management and staff of KWT will greatly missed him." May his soul rest in perfect peace.
Fatou Sowe said I will really missed a good brother but may Allah the Almighty reward him in heaven.

The late Amadou, 40 before his death was the Program Manager Health Education Unit.
He is survived by two wives and several children. He hailed from Kerr Demba Holleh in Upper Niumi District. 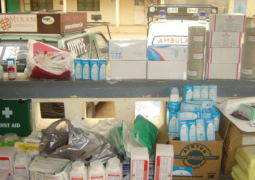