The embassy of the Republic of China on Taiwan yesterday donated farming inputs to the Gambia Armed Forces, at a ceremony held at the Yundum Barracks.

The donated items which included 75 bags of fertiliser and 24 bags of NARICA rice seeds, were presented to the Chief of Defence Staff of the Gambia Armed Forces, Lt.General Masanneh Kinteh by the Taiwanese Ambassador to The Gambia H.E Richard Shih.

Presenting the items, the Taiwanese Ambassador Richard Shih said it’s a pleasure for him to work with the GAF to boost agriculture in the country.

According to him, the gesture is called "GAF Rice Farming Initiative 2010," which also forms parts of the Gambia Upland Rice Expansion Project, initiated by President Jammeh last year.

Noting that this year the GAF will grow NARICA rice at both Yundum and Farafeni Barracks with materials and technical assistance from the rice project, he said, the rice fields shall cover 30 hectares for the first year as planned.

The gesture, he added, aims to complement the President's efforts in attaining food self-sufficiency for the country. He expressed hope that with the blessings of Allah, inspiration from President Jammeh and collective efforts of the army and entire Gambian people, the dream of food self-sufficiency is indeed attainable.

He challenged the soldiers to produce 2.5 tonnes per hectare.

For his part, CDS Kinteh applauded the Taiwanese embassy for the gesture, and pledged that they would set a shining example. He reminded the soldiers that their role is not only limited to protecting the sovereignty and territorial integrity of the country, but as well contribute to the overall socio-economic development of the country by engaging in productive activities, such as agriculture, education and engineering. He thanked the Taiwanese government for their support to all aspects of human developments in the country and further challenged his men to produce at least 4 tonnes per hectare.

"Taiwan's intervention is a step in the right direction," he said.

He added that the President's effort to lead by example is a challenge to all, especially his men and women.

Speaking earlier, the Chief of Army Staff, Shering Modou Njie said that the gesture is a clear indication of the CDS's efforts to make GAF a lead institution in responding to the President’s back-to-the-land clarion call.

‘With this gesture Taiwan is not only giving us fish, but showing us how to fish’ said the Master of Ceremony, Lt. Pierre Beyai PRO of GAF. 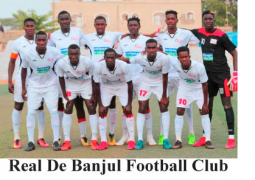