How would you deal with rejection, particularly rejection without any clear motive? How would you react to opposition that springs from within your family? First, you have to be made of ‘sterner stuff’ to be able to stand firm, coupled with your sense of purpose, so nothing can distract or deter you. “Here I am, I have come – it is written about me in the scroll. I desire to do your will, O my God; your law is within my heart.” (Psalm 40:7-8) was David’s prophesy of Jesus’ mission. He himself stated: “For I have come down from heaven not to do my will but to do the will of him who sent me.” (John 6: 38) Armed with this kind of will it would have been hard for him to quit. Second, you must be resolute in your desire to see your divine goal accomplished - in Jesus’ case that of honouring his Father.

A lot will depend on whether such rejection or opposition would divert your focus or dent your sense of duty. Because, if you identify with your high calling, nothing that people would throw on your path would be a deterrent. Why? You are already driven by a strong objective to accomplish that for which you were born, and have purposed in your heart’s mind to see it through to the very end no matter what; even amidst trials and tribulations.

Jesus came into this world to save sinners and to redeem the rights Adam lost when he sold his soul to the devil in the Garden of Eden. In fact that is the meaning of his name, Jesus – ‘come to save his people from their sins.’ But not everyone believed in him – beginning with the old guard, the Pharisees and the Sadducees. And this had been foretold.

This group represented the established religious order. They called the shots and dictated the religious norms, traditions and practices. What is worse, they ordered the lives of the people of God around with a multitude of false doctrines that honoured themselves and not God. In fact, they ended enslaving people, denying them religious freedom and expression. Naturally, anyone who exposed or opposed them became a natural enemy. Jesus’ declarations did not put them at ease either: “I am the way and the truth and the life.” (John 14:6) “I and the Father are one.” (John 10:30) It just fuelled the flame.

The New Testament is fraught with instances where the established order is constantly seeking to cause trouble for Jesus so they could seize him and dispense with him. The more Jesus in his ministry challenged the established order the more they labelled him an upstart, a rebel wanting to upset the cart. They were determined therefore to oppose him every step of the way. So Jesus faced rejection on three fronts: the established order, his hometown and strangely enough his own kit and kin.

Constantly, the Pharisees and Sadducees challenged Jesus’ authority for healing the sick on the Sabbath, a day to be kept holy. Zero tolerance – not even healing the sick. For saying to a paralytic on his death bed: “Your sins are forgiven,” when no one can forgive sins but God, the established order questioned Jesus’ authority. On one occasion they asked why his disciples were not keeping the law; on another they resented statements he made. Attempts to discredit Jesus in the eyes of his followers, continued unabated. They accused him of ‘hanging with’ sinners. Jesus countered: “It is not the healthy who need a doctor, but the sick….For I have not come to call the righteous but sinners.” (Matthew 9:12)

Jesus started his ministry at the ripe age of thirty. In recruiting his disciples, he had met with Philip who in turn had broken the news to Nathaniel. “We have found the one Moses wrote about in the Law, and about whom the prophets also wrote – Jesus of Nazareth, the son of Joseph.” (John 1:45) Nathaniel was the least impressed. “Nazareth! Can anything good come from there?” (John 1:46) This kind of remark set the tone for the open rejection of Jesus’ ministry in Nazareth. The apostle Mark records that, “Jesus could not do any miracles there, except lay hands on a few sick people and heal them.” (Mark 6:5) Nathaniel’s behaviour to a certain extent depicts the world’s rejection of the Gospel of salvation of Jesus Christ. He has been called all kinds of names, all in a bid to discredit him and his mission; but 2,000 years after his death, his gospel is still being preached.

The Bible teaches that God’s “…thoughts are not your thoughts, neither are his ways your ways.” (Isaiah 55:8) God’s redemption plan for humankind - for which he sent his Son, Jesus, is not a function of what people think, but a manifestation of his love. “For God so loved the world that he gave his one and only Son, that whoever believes in him shall not perish but have eternal life.” (John 3:16) Salvation is a gift from God and only those who accept this gift will be saved. “If you confess with your mouth, ‘Jesus is Lord,’ and believe in your heart that God raised him from the dead, you will be saved …... For there is no difference between Jew and Gentile – the same Lord is Lord of all and richly blesses all who call on him…” (Romans 10:10, 12)

Some 800 years prior to Jesus’ birth, prophet Isaiah had prophesied his fate. “He was despised and rejected by men, a man of sorrows, and familiar with suffering. Like one from whom men hide their faces he was despised, and we esteemed him not.” (Isaiah 53:3)

It might look normal that opposition should come from without, but when it comes from within it can be heart-rending. Jesus’ family could not quite understand why Jesus was ‘sold out’ in doing the father’s will to the extent that they even thought he was mad. Once they wanted to intervene when he was thronged at someone’s residence. “…they went to take charge of him, for they said, ‘He is out of his mind.’ ” (Mark 3:21) To crown it all, his brothers did not believe in him, (John 7:5) thus confirming David’s prophecy: “I am a stranger to my brothers, an alien to my own mother’s sons; for zeal of your house consumes me and the insults of those who insult you fall on me.”  (Psalm 69:8-9)

Fully aware of what his mission entailed, Jesus never relented up to the bitter end when he declared on the cross; ‘It is finished.’ Not all of us can face opposition, mockery and shame of such velocity and violence and not cave in.

All who have stood for the truth; all those who have embraced the cause of humanity have paid dearly with their lives. Jesus has given us an example of one who was fully committed to fulfilling his Father’s will. In the midst of stiff, bitter and even fierce opposition, and all his ardent followers deserted him. Jesus faced it all alone, for the glory of the Father. 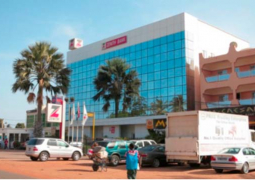