Reflections on The Papal Resignation in The Catholic Church

Barely a few days after Ash Wednesday, when Catholics began the repentant season of lent did Pope Benedict XVI tender his resignation as Pope and leader of the Catholic Church. The Catholic Church is a worldly renowned faith institution that existed for close to two thousand years with a membership of one and a half billion members. The Pope’s decision to many who heard it was a surprise because history would testify that there has never been any Pope or Supreme leader of the Catholic Church that has ever resigned his position in the past six hundred years.

To many people Catholics and non Catholics, they reacted with shock and dismay. Others got confused because they presumed the position of the Papacy in the Catholic Church is for life. The most recent Pope of the Church, the late and blessed John Paul II suffered illness and died as a Pope. For many who did not understand the Catholic Church’s Constitution, they may begin to ask questions such as how come the Pope should resign. The Holy Father, Pope Benedict the XIV gave reasons based on health and his age. For these reasons and eventually according to what he said, his decision was done for the good of the Church. For a Pope like Benedict XVI to boldly take such a decision in the Catholic Church, it may warrant for minds to question who was Pope Benedict XVI.

Pope Benedict XVI, prior to being made Pope in April 2005, was known as Cardinal Joseph Ratzinger born on the 16th April 1927 in Germany. He was brought up during the difficult years when Germany was under the Nazi regime with very harsh conditions to live in. As a young Christian he pursued the vocation to the priesthood between 1946 – 1951 and later became priest on the 29th June 1951. He was a brilliant priest and later Bishop in the field of Christian theology. (Dogmatic and Fundamental theology).  His knowledge and expertise in theology enabled him to be present and contributed greatly to the famous Second Vatican Council, 1962 1965.  He was named the Arch Bishop of Munich and Freising in Germany in 1977. Within this same year Pope Paul VI made him a Cardinal.

Cardinal Ratzinger, which is the name by which he was known, was then a great foundation and pillar of the Church in Christian theology.  He witnessed and participated in the conclave that elected late Pope John Paul II and worked very closely with the then Pope.  In fact the late Pope John Paul II named him as Prefect for the Doctrine of the faith and later the Dean of the College of Cardinals in November 2002.

This position made him to be of the highly honoured in the Catholic Church.  In the Conclave of 2005 when he was elected as Pope, it was not a surprise to many observers who followed the trends in the Church.  For some observers his papacy was not looked upon as lasting as that of the late John Paul II because people felt that John Paul’s Papacy lasted for too long a period.

The Papal resignation in my reflection was taken up with mixed feelings but my heart was placed on the unity, and continuity of the Church. The Catholic Church originally has been an institution established by Jesus Christ through his apostles but at the same time founded on this earth for the salvation of humankind.  As an institution founded and existed on this earth, it is not angelic, all holy and without sin. Therefore people should not base their judgements on the Church on sex scandals of priests or any other form of limitations of the Church. Every human or earthly institution has its own limitations but the limitations enabled the Church to strife for holiness and salvation in the name of Jesus Christ.

As the Catholic Church now contemplates electing another Pope, all the faithful and non faithful alike should pray to God that He may send his Holy Spirit to make a choice of a Servant Pope who will be willing to lead the Church like Jesus Christ the good shepherd.  (John 10:11-16)  Jesus Christ is the good shepherd who never left his flock untended.  May the Catholic Church be provided with a leader under the influence and guidance of God’s Holy Spirit for its sustenance spiritually and materially for many more years. 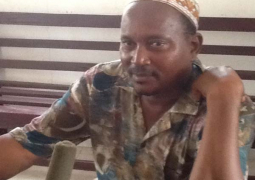 VISACA beneficiaries give thumbs up to RFP