Red-Scorpions female football club has emphatically opened up an early two points lead at the summit of the 5-club Women national team League table after four consecutive win have seen them secured 12 points with only a game remaining in the first round.

The team under the guidance of coach Choro Mbenga, got off to a bright start to the campaign by beating Armed Forces 2-nil before going onto registered a narrow 2-1 victory at the expense of Abuko United who are without the service of their best player Veronic Malack, who moved to Interior at the start of the season.

Red-Scorpions who finished as the runners up in the GFA Women’s League for the fourth successive term last season, continued their perfect start to the campaign and on their way mercilessly hammered Company Ten 7-1 in the week three fixtures followed by a deserved 2-nil win against Makasutu last weekend.

They are in firm position to finish the round one with a massive 15 points which will definitely give them huge confidence when the second round take centre stage in few weeks time.

Red-Scorpions are closely followed by the League’s record title holders Interior on 10 points.

Interior began the campaign with a surprise 1-1 draw with Abuko United which was followed by their heroic 7-nil thumping of Company Ten the heaviest defeat in the campaign so far. That defeat has left Company Ten rooted at the bottom of the table with Zero point in four encounters.

Interior is followed by Abuko United but a massive five points separates the two Female giants while Armed Forces who could only managed two draws find themselves second from bottom place with two points.

Meanwhile, the Women National League Division Two first round competition also continues to produce some fantastic games and revelations and have witnessed some surprise results particularly in week four.

Kinteh’s United of Bakau who got off to a dismal start to the campaign by succumbing to a 1-nil defeat to the newly promoted side Immigration registered the biggest win of the competition so far. The Bakau girls who were demoted to the second tier of ’s Women football last season magnificently beat Jam city 5-nil in the week four fixtures played at the Independence Stadium last Friday.

who also suffered a 4-nil battering of City Girls in their opener three weeks ago will meet Immigration in week five fixtures on Sunday at the Father Gough sports complex in Manjai.

Kinteh’s inspirational captain Hella Dico inspired her Bakau side to a five-nil hammering of their last week’s opponent as she netted a brace to see Kinteh’s crush to a famous win to boost up their chance of regaining a spot in the country’s top flight Women football next season.

Saturday’s game saw Jeshwang United played a deadly 0-0 draw against Immigration who secured seven points in three games with a game in hand against Future Bi which failed to proceed last week.

City Girls who secured nine points on Saturday defeated Future Bi 3-nil to boost up their chances to top the table going into this weekend’s fixtures against Jeshwang United with a positive result to be optimistic about. 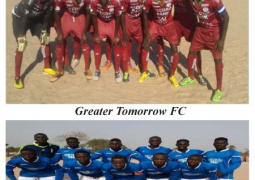 Fire service: ‘Fatality of Lamin village fire outbreak could have been avoided’