A sensational and decisive first half right footed close-range strike by Mustapha Haji was enough for real friends to clinch the first-ever Nawettan championship title, organised by Sanchaba Sports Committee after edging past Bundas in Sunday's final.

A well-attended Nawettan final, which was played in Bakoteh football field saw Bundas' failure to capitalise on the numerous scoring opportunities they created.

Both teams went into the crucial final with the main objective of lifting the first-ever organised summer championship in Bakoteh but real friends were the better side of the day, due to their brilliant attacking options and dominance in the middle which really paid dividend when Mustapha Haji nodded home his side's only goal of a titanic encounter under the gears of the Sanchaba Sports committee.

Ebrima Sama, the Head Coach of Real Friends who commended his players for putting up a respectable performances told Pointsport that he has been preparing this team for the past two years, adding that it was not a surprise for him to see his team lifting the trophy for the first time.

The Treasurer of Sanchaba Sports Committee, Pa Lamin Gaye who underscored the importance of the championship, said the tournament will help them in order to bring the youths of the area together so as to strengthen the relationship among them.

He also expressed hope that the tournament will be transformed into an annual event. 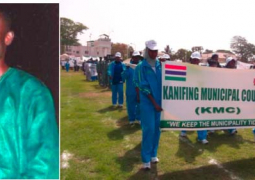