Gamtel FC, Santos United FC, Happy Gunjur FC and Comium, are all through to the quarter-finals of the ongoing Gunjur Knock-out Tournament after winning their matches over the weekend.

Gamcel made it to the quarter-final following an impressive 7-nil win over Janneh Koto FC as part of the first game of the day, while Santos United also advanced to the quarter- final with a 4-3 win against late Pa Jobe in the other game played over the weekend.

Happy Gunjur also booked their place in the quarter-final, after beating Nyokoyorr FC in a penalty shoot-out, while Comium FC also made it after a narrow 1-nil win against Ismaila Fc in the evening encounter.

The championship continues on 17th October when entertains Nas FC, while Qcel will also face Comium on the same day.

The tournament, which will wrap-up on Sunday, will feature Nyo Felleh and New Town United, while the last game of the championship will see another mouth-watering encounter between Cathy and Pentagon at 5.pm on 17 October 2009. 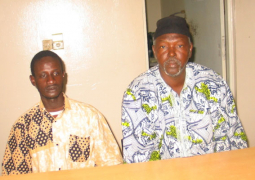