Real de Banjul thanks all for support 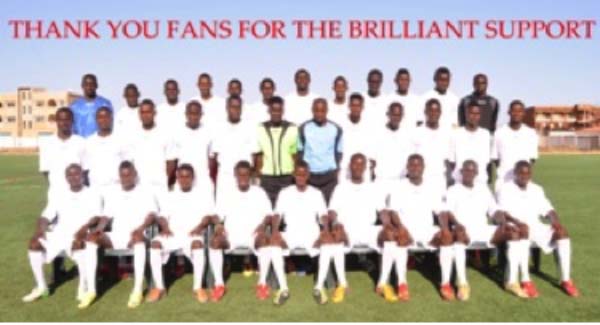 The executive, players and coaching staff of Real de Banjul would like to express its sincere thanks and gratitude to everyone that in one way or the other supported the team during its campaign in the CAF Champions League.

Real exited the Champions League qualifiers in the First Round on Friday against African champions ESSétif with a 2-0 defeat (3-1 aggregate), but the support received during the competition has been tremendous.

Thus, the club has decided to express its thanks to everyone who in one way or the other supported and helped the team as we were overwhelmed by the wonderful show of solidarity and love for the team.

Thanks to The Gambia and Real de Banjul fans/supporters at home and abroad who have been inundating our emails and messaging us daily to ask about the wellbeing of the team.

Many thanks also goes out to our Facebook and Twitter followers, the media/journalists, the entire staff, and executive of the Gambia Football Federation.

Finally, we did like to thank the Government of The Gambia, through the Ministry of Youth and Sports for the support and allowing us to represent our country in the international arena.

The club would now shift its focus in trying to reclaim the League Division One title and also compete in the FA Cup.

A Step in the Right Direction