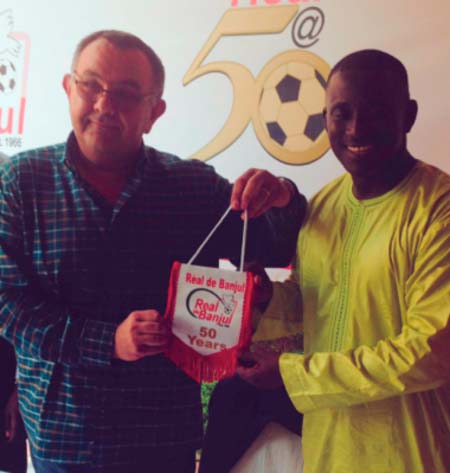 Real de Banjul have signed a Memorandum of Understanding with the Gambia Radio & Television Services for the Real @50 celebrations.

The signing ceremony, which took place at the Oasis Apartments along the Senegambia highway on Thursday afternoon, saw the two cooperate to promote the event and GRTS providing coverage, presenting bi-weekly programs on the TV and providing of airtime both on radio and TV.

Real de Banjul President William Abraham began by thanking the President of the Republic, His Excellency Sheikh Professor Alhaji Dr Yahya AJJ Jammeh, Babili Mansa, for the peaceful environment and for supporting sport in the country.

“This is a spectacular thing and one of a kind in the country. We cannot thank the GRTS DG for always opening his doors to me and the Club.”

For his part, the Director General of GRTS, Momodou Sabally, said: “There is so much beauty in the country with beautiful stories and as state broadcaster, we feel it’s our duty. I believe in partnership and I am committed to my work.”

He added: “I think we are ready for takeoff and make this celebration a big event! I want to thank William Abraham and all at Real de Banjul for allowing GRTS to partner with them for this #RealAt50 event.”

“Football is business and that’s how it should be done. I commend Real de Banjul for the good job they’re doing. We are journalists and we should not wait for any invitation to cover events, we should be there because it’s our job.”

Real’s 2nd Vice President Bakary K. Jammeh, who delivered the opening remarks, said: “This partnership with GRTS is remarkable and that is all thanks to its DG Momodou Sabally.”

Former manager and founding member of the club, Alhagie Mam Sait Njie, gave the vote of thanks on behalf of the elders of the club.

The ceremony was attended by the media, founding members, former players, current players and coaching staff of Real de Banjul and some supporters.